Setting the Gap for Performance
One of the most common questions I am asked is, “How much room should there be between the car body and wheel hub?” My first answer is, “Well, our Pro-Axle Guide, Alignment tool, and the Gap Gauge in our speed kit will set the spacing for you.” Then the next question is, “If I don’t have those, what should I do?” My response is then, “Try using a credit card. It will set a gap that works.”

Of course, these responses beg the original question of, “How much room should there be between the car body and wheel hub?” Or better yet, “What is the optimum gap?” I have heard and read some distinctly different opinions on this topic. Several people have said that they set a fairly wide gap in an attempt to minimize the contact between the wheel hub and car body (and also to simplify making the needed observations when performing alignment using the Shim Method). On the other side, Michael Lastufka’s DOE (Design of Experiment) tests showed that best performance is attained with a small gap.

Which is right? I can understand the thought process behind the wider gap; less opportunity for contact. But, I also recognize that a wider gap allows the car more “wander room”, thus permitting the car to travel a greater distance during its trip down the track (remember that the shortest distance between two points is a straight line).

Experiment Setup
So, I decided to set up an experiment to measure performance versus the wheel to the hub gap. One car, one set of wheels, and one set of axles was used throughout the experiment. Outlaw wheels where used to minimize the effect of guide rail and track surface contact. Krytox 100 was used as the lube to minimize break-in and maximize the consistency of the runs.

The following gaps were tested. A set of feeler gauges were used to set the gaps.

In order to minimize the effect of lubricant breakdown, the test was limited to five heats per gap setting (total of 35 heats). On the first pass, three heats were run per gap, going from the largest gap to the smallest gap. Then two additional heats were run going from the smallest gap to the largest gap. The high and low runs per gap setting were discarded, and the three remaining runs averaged.

Experiment Results
As can be seen in Figure 1, the smaller gaps outperformed the larger gaps. Note that there is no real difference in performance between the three smallest gap settings (the difference is statistical noise). However, as the gap increases, performance decreases in an almost linear fashion.

Conclusion
So what is the bottom line? Clearly the gap setting does affect performance. For best performance, use a small gap setting (such as provided by the available gap tools). If one of these tools is not available, then use a credit card (which is typically 0.030 inches). 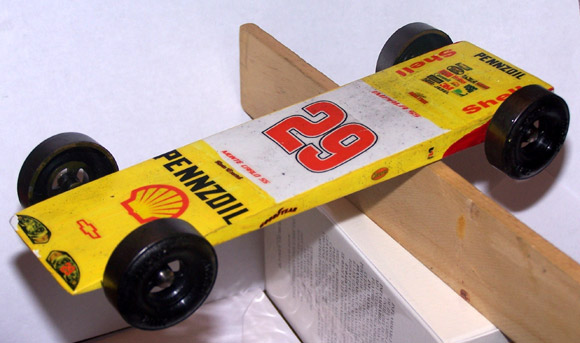 This car was my daughter Brianna’s (age 11) first ever submission for her April 2007 Awana Grand Prix race. The paint/decal scheme is similar to NASCAR’s Kevin Harvick. Kevin was the winner of the 2007 Daytona 500. Brianna proudly wore her matching Kevin Harvick NASCAR t- shirt for the Awana race. The car features an extended wheelbase and super wedge design. All the weight is located near the rear axles, the is 5.0 ounces. The wheels are race ready graphite coated slicks. The axles were smoothed and grooved to reduce friction and hold additional graphite lube to endure the race. The car raced a total of 8 Class races. It sped to 1st Place – Top Speed in Class, then Top Speed Overall to beat all competition, including parents. The race car also garnered 2nd place in class for design. We’re looking forward to start building our 2008 Awana Grand Prix racers. 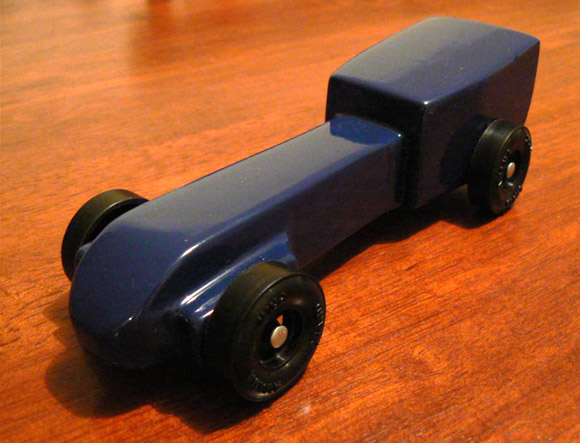 My car received its nickname from an uncle who thought the design would demolish everyone else. This was our first pinewood derby and we only gained interest by watching “Down and Derby”. Anyway, after I finished watching the movie I got on the Internet and happened to fall upon your website. I quickly soaked up all the information and designed my car. I then built a prototype and was happy with the result. I made a few changes and this is what I came up with. I then realized that there were still four months till the race and I was already prepared to build the race car and race. However I had to wait two months before I received the kit and then I built my car. It took me a week to finish the sanding and then I started painting. I sprayed four coats of white two to three times a day for the last week before the event, until it had twenty plus coats of paint!!! I didn’t have any graphite yet but I needed the wheels on to participate in the test runs. I was amazed how much better it performed than most of the other cars (nobody else had lubricant either I am glad to say). Now to fast forward to race day. Excitement builds as cars start coming and the race hour draws near. I am participating in the leader’s and dad’s race so I have a few stiff competitors. I placed 3rd overall, and I lost to someone who I had given tips from your site to (my mistake!). 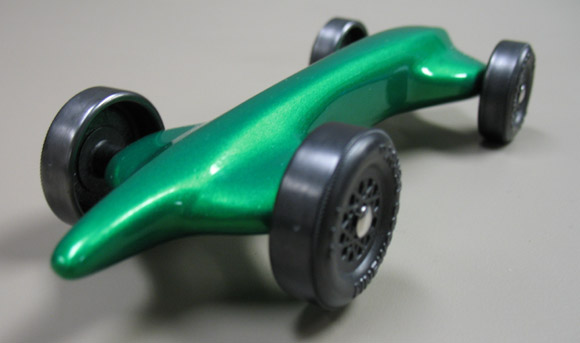 This was my son’s 2007 car. He was a Wolf and we used some of your matched wheels, tungsten weights, drilled block, and some tungsten putty. He ended up 1st in Wolf at the Pack level, 2nd in Wolf at District Semi Finals, 1st overall at Semi Finals (don’t ask how this works, we can only blame it on less than perfect brackets), and 2nd at the District Finals.

Last year I helped my grandson build a pinewood race car. I’ve helped him build other cars before. Anyhow this time we thought we would try a lightweight wheel, weighing about 1.2 grams.

Well, on race day he won his first race by half a car length. On his second run he again won by about half a car length, but on hitting the stop his right front wheel came apart. We replaced that wheel with a standard wheel out of the BSA kit. Over the remaining runs he lost the left front wheel then the right rear wheel. Of the 27 cars racing he still came in second!!

When he and the other two boys where having their picture taken holding the car and trophy his left rear wheel, last of the light weights, fell off!!!

We’re considering purchasing an aluminum track for our Cub Scout pack, but are uncertain as to whether to buy a four or six lane track. We have about seventy boys in the pack. What are your thoughts?

I would opt for the four lane track for the following reasons:

I suggest you use the funds to get a longer four lane track (forty to fifty feet). A longer track means:

Just make sure you have the space to set it up!

When using the tungsten plates, is there adequate clearance without recessing the weight?

The plates are 1/16 inch thick. If you use Cub Scout standard slots or axle holes drilled at 1/8 inch off the bottom (measured to center of hole), you will make the 3/8 inch clearance. If you use deeper slots, or axles holes set higher on the block, you may or may not make the clearance. Paint thickness will also affect clearance.

To be safe, you can create a pocket to recess the plates.