For those of you who may not have a Cub Scout in the family, March was pinewood derby month. This was the third of five derbies for us, and through it all I’ve gleaned a few tidbits of wisdom.

You can read more of Michelle Mitchell’s writings at: scribbit.blogspot.com 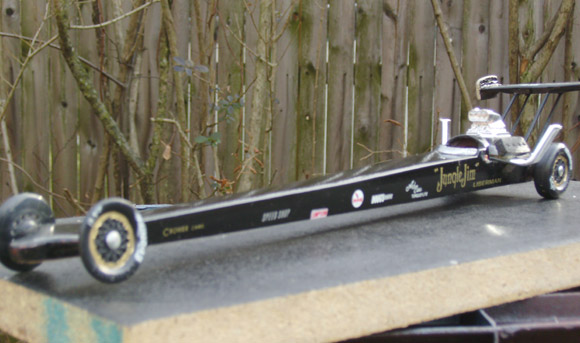 This is the product of a man with too much time on his hands. It is constructed from two official Cub Scout PWD blocks making it 14 inches long. Add another inch for the swept rear wing and the car tops out at 15 inches long. The wheels and axles are also official BSA parts although extremely modified. The car weighs in at five ounces and was built mostly for show although it will run very fast. 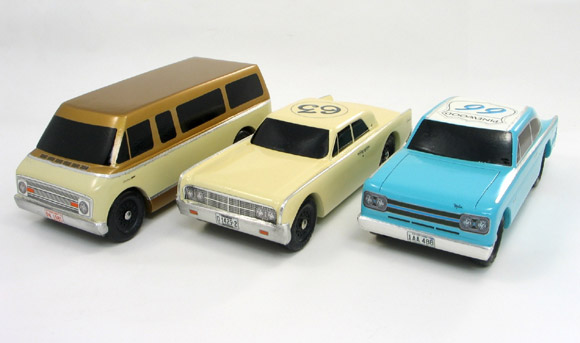 This year we decided to make copies of the three classic automobiles we own. Noah built a 1966 AMC Marlin, I built a 1963 Lincoln Continental and Diane built a 1974 Dodge Sportsman van. There was trouble getting the van to the 5oz. weight limit so it never did race – lesson to self, if you are trying to make a vehicle this big you should use balsa. In the race, the cars ran well. Noah’s car placed second in the Bears and my car placed 1st in the parent-sibling race. 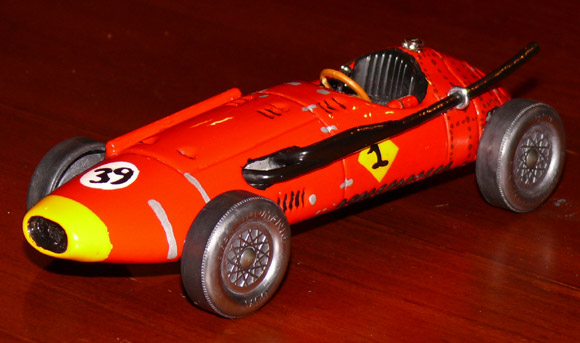 My son, who is a Tiger Cub (7 years old), and I have watched racing together since he was born. This was his first derby. We were watching the Speed Channel before we started the car, and saw a show on the 1957 Masarati 250F. We decided right then, that was the car.
Since it had been 32 years since I competed, I wasn’t sure what the competition was going to be like. So we decided to make “Best of Show” our goal, and make learning what the competition was like to improve the next year the second goal. In the end, he won “Best of Show”, and was in the top sixteen for speed!

The car has four coats of sanding filler, and four coats of base coat (Italian Red). All of the details were then painted on. Finally, three coats of Gloss Clear coat were applied.
We hand made the exhaust and headers out of 1/8 inch steel rod, and buried all of the weight into the car. My son and I put tons of hours into the car; he and I worked together on all the building. As a result, he won “Best of Show”.

Last year was our first ever Pinewood Derby. As a Tiger Scout my son had no idea what it was all about so he did not show much interest in building a car. I just wanted a car that would not end up in last place.

We first looked on the Internet for a simple design that would be easy to make. My son helped draw it out and we worked together as I showed him how to measure and make straight lines. After cutting it out he helped briefly with sanding till he got bored (around 10 seconds).

My son did all the painting as we used house paint for the body. He wanted to make some cool colored wheels so we found some model paint and he proceeded to paint the wheels and axles. After it was all dry the car would not move. So we got some new wheels and axles. He used every number sticker that came in the kit – boy he was so proud of himself. He won the “Best use of Numbers” award. 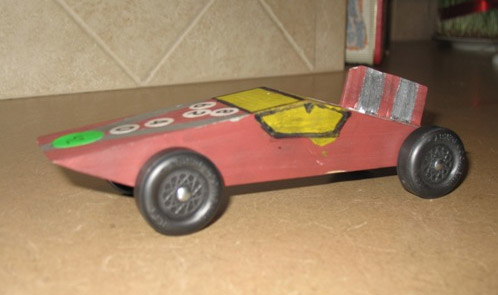 The funniest part occurred at race day. After being allowed to graphite up one more time the scouts entered one at a time with certificates and cars. My son came in looking like a raccoon as he had wiped his face with hands covered in graphite. Okay, so Dad put a bit too much graphite on the car.

My son really enjoyed cheering for all the other Tiger Cub’s cars and munching on the snacks. I was happy as he took 18 out of 48 (he likes to win so he was a bit sad when he did not make the finals). So this year he put his sites on winning; I talked him into just shooting for a top-10 finish.
Jim Shryock

Our local rules allow us to lengthen the wheelbase, so I’ve done that. In your literature, the best COG position is 3/4 to 1 inche in front of the rear axle. Does this position move with the new axle placement or is that number relative to the original cuts in the bottom of the block?

The optimal COG position is always relative to the rear axle position. This is one advantage of an extended wheelbase car; the COG can be moved further back on the car.

My son is using designer stick-on weights on his pinewood derby car, but he also wants to use a custom body skin instead of paint. Will the weights adhere to the body skin? Can he apply body skin to the weights? Thanks for your help.

I have not tried sticking the weights directly to the skin, but it probably would work. But I don’t recommend putting the body skin over the weights; the skin would likely tear on the sharp corners.

Do you have to paint the car before you wrap the car with a body skin?

It is best to put on a primer coat first, but it is not necessary. You can wrap the bare wood, but be careful to not get the bare wood too wet as it can affect the axle slots (or axles holes).