– Feature Article – Runoffs: When and Why to Run Them
– Pinewood Derby Car Showcase
– Q&A

With the advent of Race Management software, many events have transitioned to a chart-based racing method, whereby all cars run the same number of heats, race in all lanes and are paired against a broad selection of other cars. These methods are much fairer, and are more accurate in assigning trophies.

But when using a chart-based method, the scoring method must be selected: time or points. I won’t get into a full comparison of time vs. points in this article.1 Time-based scoring is certainly popular and is really the best choice for large events. But for smaller events, I prefer point-based scoring. I believe this method keeps the audience more engaged, keeps each heat exciting, and makes the finish order of each heat important.

But with point scoring, the final trophy assignment may not be accurate after the heats are complete. Like elimination methods, random heat assignments can result in the third fastest car being relegated to fourth place.2 So, to ensure that trophies are assigned properly, another round for the fastest cars may be needed. Let’s look at when a second round is needed, and how many cars to select for the second round.

The simplest case is 4 cars on a four lane track, racing one time per lane. Each car races one time in each lane, and in each heat races against the other 3 cars. Other cases of Perfect-N charts will be described below.

A PPN chart is one in which each car races the same number of times in each lane, and heat assignment is optimized so that no one car races against any other car more or less than one time greater than the average.

For a four lane track, Perfect-N charts exist for the following numbers of cars3:

For all car counts greater than 13, only PPN charts exist.

When a race has a Perfect-N chart the race is perfectly fair and a run-off is not needed (except in the case of tie). But if the race has a PPN chart, it is possible that a trophy may be incorrectly assigned. In this case, a run-off race is required.

HOW MANY CARS SHOULD BE IN THE SECOND ROUND?
From the above discussion, the answer is clearly that a number must be selected that has a Perfect-N chart. In no case should a second round use a PPN chart.

Implementation / Conclusion
I grant that a time-based race is easier to implement, as the need for a second round is not necessary. But with a modern race management application, such as Grand Prix Race Manager, creating a second round is quite easy. In our race, we typically have the second round ready to go in two minutes from the completion of the final heat of round 1. Our emcee fills the time with a few kid-friendly jokes, so the excitement of the event continues during this slight delay. Then during the second round (seven cars typically take less than ten minutes), the excitement level (and sound level) reaches its peak.
If you are currently using a time-based method for your small race, consider switching to a point-based method. I believe you will generate greater interest and excitement, for just a few extra minutes of event time.

1For a comparison of these two methods, please refer to: Points or Times: Which Method Should I Use?

3If you have a track with more or less than four lanes, you can use Grand Prix Race Manager (GPRM) to determine the Perfect-N charts.

4A phantom car is inserted into the schedule. When it races, the lane is left empty. GPRM automatically takes care of byes.

Here are some cars from the “Wood and Wheels” race held in Australia (Maximum Velocity supplies the wheels and axles for the race). The photos were submitted by Matthew Webb. 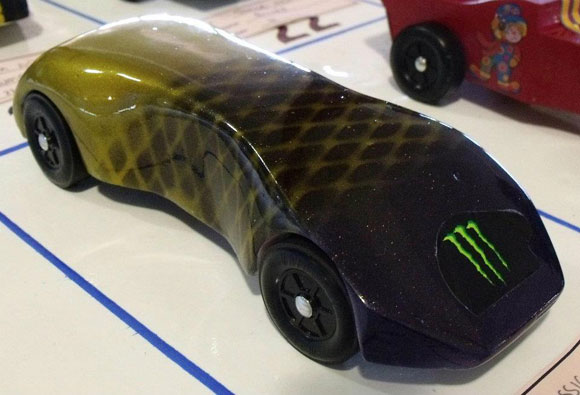 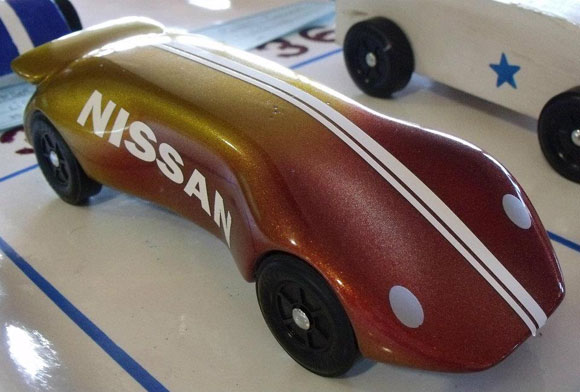 Also, a Formula One Awana car built by Matthew: 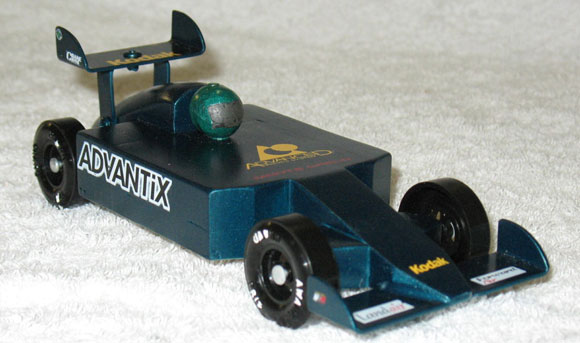 Last year I used full-weight BSA wheels and we easily took first place. This year, I used weight-reduced wheels. We still took first place, but it was a tight race. Why would that be? Aren’t lighter weight wheels faster?

Lighter wheels are faster, all else being equal. There are many things that could have been different the second year that were out of your control (track setup differences – levelness, location; better competition; staging, etc.). So it is hard to say what happened. You would have to run the two cars side by side on the same track to see which was really faster.

Personally, I would always use light-weight wheels if legal for the race.