– Feature Article – Points or Times: Which Method Should I Use?
– Pinewood Derby Car Showcase
– Memory – Never Too Late to Start
– Q&A

Points or Times: Which Method Should I Use?

Life used to be simple. Only a few TV channels to choose from, no Starbucks to give us multiple coffee options, and pinewood derby winners were decided by elimination. But since humans thrive on innovation, we now have lots of channels and coffee choices, and we have other options for running pinewood races.

I for one am pleased that other options exist for deciding pinewood derby winners. For years we used a double-elimination method. I tried very hard to make the race fair, but I realized that issues existed. Although reasonably simple to implement, elimination methods are fraught with problems, and – unless very carefully implemented – are not very fair (see Volume 3, Issue 7 – “Elimination Methods – Let’s Make Some Improvements”).

So, when I discovered Points racing, our organization quickly shifted over to that method. At the time, we had a finish line judge, but it was not a timer, so there was no debate as to whether to use Points or Times; Points was the only choice.

Then we replaced the finish line judge with a timer, and integrated the timer with the Grand Prix Race Manager software. By the magic of software, we could now use Points or Times, and – after the race – dynamically switch back and forth to compare the two methods.

I first did this comparison for our 2004 race. We were using Points and each car ran once in each lane. The top finishers then advanced to a finals round (we advanced 10 car). In the finals my son’s car ended up taking fourth place. This seemed strange to me, for as I watched the heats I expected him to take third place.

So after the race, I did a little investigation and discovered that, by average heat time, his car was actually the third-fastest car. How did he end up in fourth place? This happened because of the race mix in the finals.

When I made this discovery, my first thought was, “Next year we are going to use Times!” But later, I decided that making a rash decision wasn’t the wisest move. So, I did some investigation regarding the two methods, the result of which I will now share with you.

Defining Points Vs. Times
Just to make sure we are all thinking the same thing, let’s define Points and Times.

The Points method uses a preset race schedule (we use Perfect-N), wherein each car races the same number of times in each lane, and races against as many other cars as possible. The results of each heat are recorded, with points assigned based on the finish order. Points can be assigned as 4, 3, 2, 1 for 1st, 2nd, 3rd, and 4th places (high points wins), or 1, 2, 3, and 4 points for 1st, 2nd, 3rd, and 4th places (low points wins). The points are then totaled and the winners decided.

The Times method uses a preset race schedule, wherein each car races the same number of times in each lane. Generally, the cars race against as many other cars as possible, but the heat mix does not affect the outcome. The heat times are accumulated, and then trophies are awarded based on the lowest cumulative time, or lowest average time.

Points – Advantages/Disadvantages
Let’s first look at the advantages and disadvantages of the Points method.

Times – Advantages/Disadvantages
Now, let’s look at the advantages and disadvantages of the Times method.

Conclusion
After this analysis, I decided to stick with the Points method for our local race. I believe this method has fewer problems and is more easily understood and accepted by the participants and their parents.

I have 2 boys who have since grown out of Cub Scouts and the pinewood derby. But for several years our family looked foreword to our annual fun. We couldn’t build just 2 cars; we also had to build one each for my wife and I. This helped me get over the urge to help Alex and Greg too much with their creations.

Another leader and I always had a fun race after the boys were through. The pack would challenge each other and us until it was time to leave. Over the years we got better and better thanks to your newsletter, tools, and tips. Throughout the years we have built race cars, space shuttles, a dog car, a porcupine, and even a shark. With this hot dog car I ignored aerodynamics altogether to get a fun design. It wasn’t the fastest car that year, but the kids loved it and it ran respectable times. We have a lot of great pinewood derby memories and still really enjoy reading about other peoples experiences in the Pinewood Derby Times. Thanks Maximum Velocity! 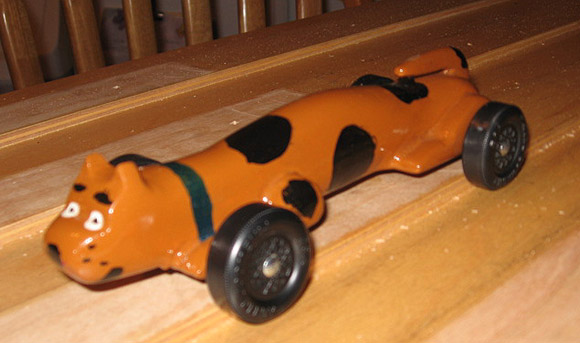 This is my son’s second year Pinewood derby car. He was into Scooby-Doo more than anything. Scooby won best design and 4th out of 10 Tigers. It may not have been the fastest, but to my son it’s the best car ever. 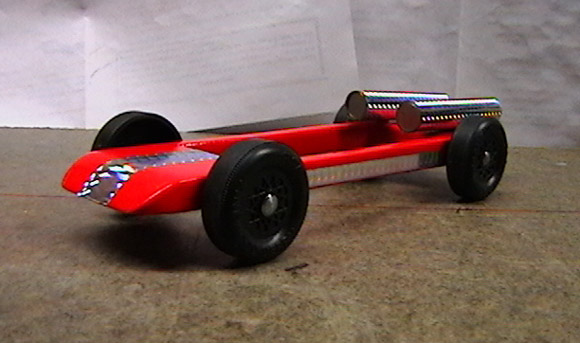 In 2006, Glenn’s (my son’s) car placed 3rd out of 29 Tigers. This year, I asked him what his goal would be – looks or speed. He enthusiastically chose speed – he didn’t really care whether it looked good! So after researching car designs he fell in love with the look of ‘The Speeder’. After numerous hours of prep work, sanding the body, axle polishing, wheel prep, and weight placement to find the optimum center of gravity – that required all of Dad’s patience – we got the car put together. At the Pack race Glenn’s car placed 1st out of 21 Wolves, and the icing on the cake was that he also won 1st Place for the Best Car Design. Now, we’re off to the Council races!

This was my first pinewood derby as a Dad. Due to lots of time constraints (Christmas break, where we went out of town, a science fair project for school that had concurrent preparatory time as the as pinewood derby, life in general, etc.) we started way too late, like the Thursday before the race. About the only thing that saved the day was that I had the forethought to subscribe to the Maximum Velocity newsletter in November!

Anyway, when installing the weights I accidentally splintered the wood severely, enough that it was beyond repair. Luckily, my son had selected a wedge-shaped car and still had enough wood to make another car out of the other half of the wood block. Obviously, the axle slots were not cut, but we went ahead anyway. My son sanded, painted, and put the pin stripes on the car. Then he helped polish the axles and wheels. We didn’t wet sand as my wife had already thought that I had gone “Down and Derby”, and I didn’t need to give her any more fuel for that fire! I hand drilled the axle holes, which I know is blasphemous, but it was my only choice. We lubricated with McLube Sailkote, since I had some for my sailboat. The wheels spun for a long time. After a rough alignment check we were ready.

At the weigh-in we started heavy, but got it down to 5.0 ounces. Since we had started so late I really had no hope, especially since there were no local rules published, and I saw lots of kit cars and speed wheels (no outlaw wheels, however) among the entrants.

After the first heat, my son and I got hopeful. As the heats wore on, and his friends slowly got eliminated, he got more excited. We made it to the 5th heat, where there were only 6 cars competing, before we were eliminated. So, out of 31 entrants, my son was tied for 5th. He was a little disappointed, but still very happy to have finished where he did.

Next year, we’re starting earlier; and we are buying the Pro-Body Tool!!

Do you have any information related to Royal Ranger pinewood derby cars?

Yes, we have a couple of resources.

What would BSA wheels do if they were run inside-out? Would the outside side wall be smoother when hitting the guide rail, or would the car jump off the track?

I haven’t tried running them inside out, however, I think the performance would be much worse:

If you try it, let know how it goes.

Would you be able to direct me to a design for an alligator car? We’re going all out this year, but are having trouble finding anything alligator oriented (at least something without an extended tail).

Here is an Alligator Car that looks good and would be relatively easy to build (car designed by Greg Walters).

I think the car in the photo with the Gator Body Skin would be a good compromise between design and performance.