One of the five keys to performance1 is alignment. The purpose of alignment is to adjust the steering of the car such that the car rolls in the desired direction.

But what is the desired direction? The seemingly apparent answer is “straight”, and that was the answer I would have given in the past. But does straight alignment really produce the best performance?

Nothing Is Perfect
The answer is no (this will be proven experimentally later in this article). If the track was perfectly level and smooth (no deviations whatsoever), and if the car could be set perfectly straight (again no deviations), then clearly, straight alignment would be the best. But a perfect track is an impossibility (most tracks are far from level and smooth), and in fact, perfectly straight alignment is not possible. So, what happens if a car that rolls reasonably straight is raced on a track that is not perfect? It will exhibit one of the following behaviors:

So what can you do to get the best performance within the limitations of the track and the car’s alignment? The answer is: create a Rail-Rider™ car.

Experiment
This discussion is all academic, so let’s set about proving whether or not rail-riding really provides the intended benefit.

First, we must create a car with a front-right wheel with a toe-in/toe-out adjustment. This allows the car’s drift to be adjusted without removing the axle, thus minimizing experimental variance.

The toe-in/toe-out adjustment was accomplished using set screws. Aluminum tubing was used to hold the axle and provide a pivot point (see Figure 1). 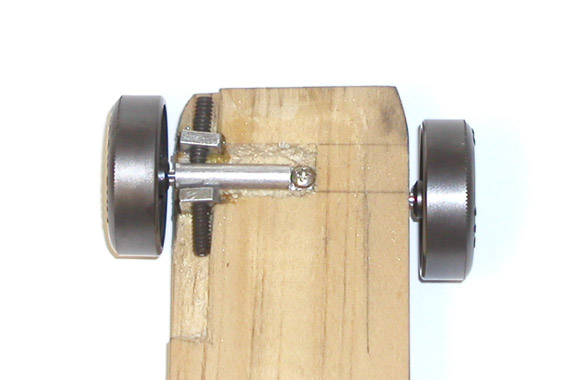 Six heats were run, each with six different toe-in/toe-out settings.4 The inches of deviation is the amount of drift over an 8 foot run on an alignment board.

After the heats were run, the high and low times were removed and the remaining heats averaged.

The results of the experiment are shown in Figure 2.

Conclusions
The experiment clearly proves the benefit of rail-riding. For this experimental setup, a drift of up to 5 inches (and probably more) provides an incremental performance benefit. But, please note that the aluminum track on which this test was performed has a very smooth center guide rail. On other tracks, especially wooden tracks, the best amount of drift would need to be experimentally determined. A rougher center guide rail may require a lesser amount of drift.

3During this experiment, no graphite was used. However, the same car was used for a later experiment which used graphite. The photo in Figure 1 was taken after the second experiment, so graphite can be seen on the tread surface of the wheel.

We are almost out of showcase cars, so I thought I would share our 2007 cars (not shown is the original prototype of the Velocinator, which was included in Volume 7, Issue 4). 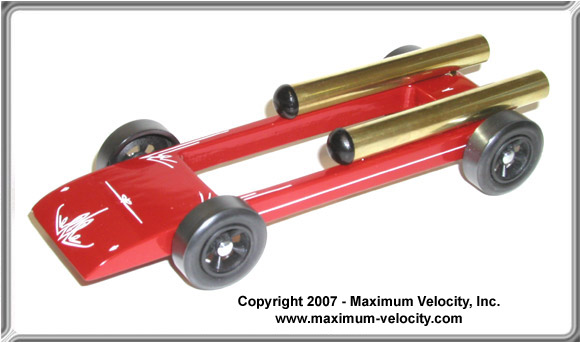 My youngest son, Stephen, has always liked the Speeder (I do too). This is the second Speeder he has made (the first was in 2002). It was quite fast, taking 3rd place, but not fast enough to catch his sister’s 1st Place car. 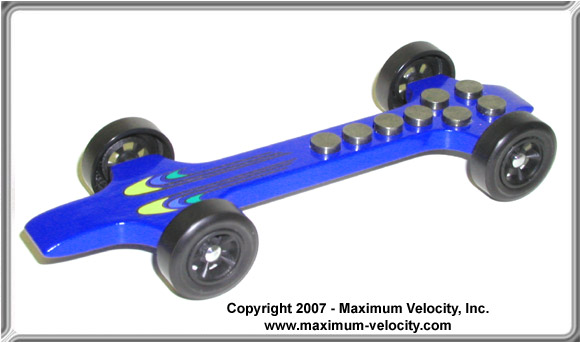 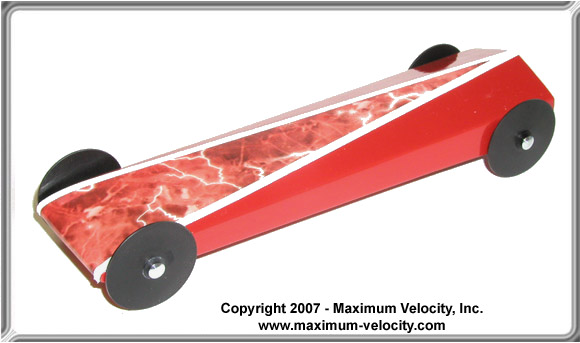 As a Cubmaster with three boys in Cub Scouts, I didn’t know anything about pinewood derby racing when I first started. But I always believed in my sons doing as much work as they safely could. They would do about ninety percent of the work with me by their side helping them, or they watching what I was doing. I always believed in the “Do your Best” motto. More importantly was that they were happy with the way the car looked. I would suggest that they do a little more sanding, or touch up the paint, but only if they wanted to do it.

The best my oldest son did was about 10th place. I learned how to build fast cars with him.

My middle son came in first place two years in a row. At the end of the race he was hearing some comments from his buddies like, “I bet next year he’ll win again”. So when the next year came, I suggested we do something different and not worry about speed. He agreed. So when the next race came we made a great looking hot dog on a bun. Talk about NOT being stream lined. Well, he came in fourth place in the race and won “Best of Show”.

Now my youngest son, who is a Webelos 1, knows what he wants. He wants low, slick, and fast; and he has come in first or second place every year. But, the best thing is that we have fun together and learn from each other.

Do you recommend jewelry polish for axles? I think it is called rouge. How do you use it?

Jeweler’s Rouge is a polish that can be used on axles. Red jeweler’s rouge (which is iron oxide) is the most common variety. It generally comes in a bar which is somewhat brittle.
To use it, rub a damp cloth on the rouge bar. Then apply the damp rouge to a spinning axle. Make sure to buff off the axle with a clean, dry rag. Then lubricate as usual.

When using NyOil II or powdered graphite how do you apply once the axles are glued into place? I’ve read about gluing axles with hot glue, etc. so it seems that this would be difficult to accomplish once the axles are set in the body.

I recommend lubricating before the wheels/axles are mounted on the car. Generally, you do not relube during a race.
If the car could progress to a future championship race event, then glue the axles with white glue. This will hold them in place, but the glue bond can be easily broken for axle removal. Then clean, lube, and remount before the next race event.