Credibility of the Race

As a derby leader, I am very much concerned with race credibility. Every participant in a derby wants to know that the race is completely fair, so the derby leader must take every precaution to ensure that there is no bias in the race. To the race participants, the race procedures must be above reproach.

To run a race with integrity, the derby leader must make every effort to eliminate all of these forms of bias.

The purpose of this article is to provide you with guidelines and practical steps you can follow to keep your race above reproach. Remember that the goal is not just to eliminate race bias, but to also eliminate any perception of bias by the audience and participants.

Race Rules
The first and very important area to consider are the race rules. Most organizations provide very simplistic rules that are incomplete, and that can be interpreted in many ways. Therefore the rules must be:

Rule 1 is very specific as to what can be done with the wheels. A car with narrow wheels, H-Tread wheels, etc. would clearly be disqualified from a race using this rule.

On the other hand, rule 2 is ambiguous and could lead to problems. A car with narrow wheels or H-Tread wheels should be allowed to participate, since the rule does not disallow narrow wheels.

As an example of the need for complete and specific rules, one person wrote to me stating that they wanted to remove material from the wheels. This particular technique was not mentioned in their rules, so they asked a race official (not the head official) if the technique was allowed. The race official gave them permission. But at the weigh-in, the head official disallowed the technique, and the car was banned from the race. This was clearly a case of unintentional bias (hopefully it was not intentional), and could have easily been eliminated with clearly written rules.

Check-In
The next area to consider is the check-in. The purpose of the check-in is to register, inspect, and impound the cars. This procedure must be done in a fair and consistent manner. Here are some specific ways to eliminate bias in this phase of the race:

As an example of this problem, during one check-in our scale was located under an air-conditioning duct. Whenever airflow was present, the scale would read a slightly greater weight! Once we realized the problem, we covered the duct. But we had to reweigh all of the cars to make sure that everything was fair.

Car Storage
If your check-in occurs immediately prior to your race, then storage is not an issue. But in some races the race evening is shortened by holding the check-in on a prior night. The cars are then stored until the race.

To ensure that our race is above reproach, two non-related officials store the cars, and then put a “seal” on the storage area. On the night of the race, the same two officials check to make sure the seal is not broken. The seal can be as simple as an adhesive label placed across the opening of the storage cabinet. The two race officials then initial the seal.

This process may seem excessive to you, but if a parent ever asks how we ensure that no tampering occurs while the cars are stored, we are ready with a good answer.

Race Format
Race formats can also introduce bias. We have covered race formats in much greater detail in other articles, however here are some basics.

Car Handling
One of the worse things that can happen in a race is for a child to drop their car. But even worse is for one of the race officials to drop (or even mishandle) a car! Thus, use a race procedure whereby the officials rarely if ever touch one of the cars. This means that each car owner picks up their car from the staging area, places the car on the track, and then returns the car to the staging area at the end of the race. In the case of very young or disabled car owners, parents or a sibling can take on the car handling responsibility.

Conclusion
I realize that to implement all of the above mentioned precautions will take extra work on the part of the race official. However, you must ask yourself one question. If a parent came to me and said, “My child’s car is being treated unfairly,” what would you say? If you have implemented all of the precautions above, you can ask the person to clarify, and then explain how the precautions you have taken ensure that each entry is treated fairly. But if you have not taken the necessary steps to eliminate race bias, you will find yourself in a tough situation. 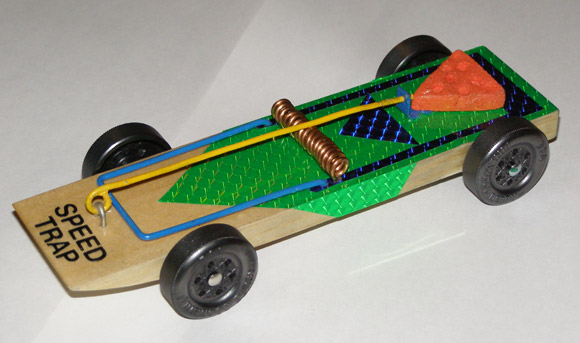 This is my son’s 2007 pinewood derby car called “Speed Trap”. He got the idea from this past winter when we had a little mouse trouble in the house. We went to Lowe’s, bought some mouse traps, and solved our mouse problem. But my son thought it would be funny if he raced a mouse trap this year. So, we studied a standard mouse trap, purchased some materials from our local craft store, and drew the initial idea on paper. It actually took us two tries to build this car, but we both think it turned out great! Hopefully, it will perform as well as it looks. If not, he hopes to win a design award. 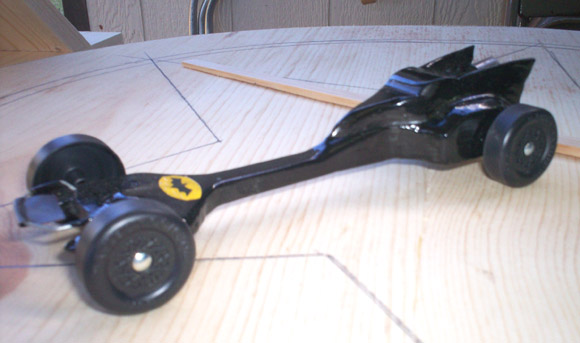 The inspiration for this car was the Batman car of the movies, but my son Brady wanted a pinewood derby car that looked like his Hot Wheels Batman car. So with a copier I enlarged the profile of the car to pinewood derby size. I used a scroll saw to cut out the car, and then a Dremel tool to shape it. It then took a lot of fine sanding to shape the wings right. I have built a lot of cars that have won and lost, but the Batman car stays consistent; it has never placed below 2nd at any race.

This car raced in February in our local pinewood derby and won 1st place. In then took 1st in a district race, 2nd in an RA race, and then 1st place in a local RA race. It also won 1st place in an Outlaw race; I added weight in the back between the high fins to reach the higher weight limit. 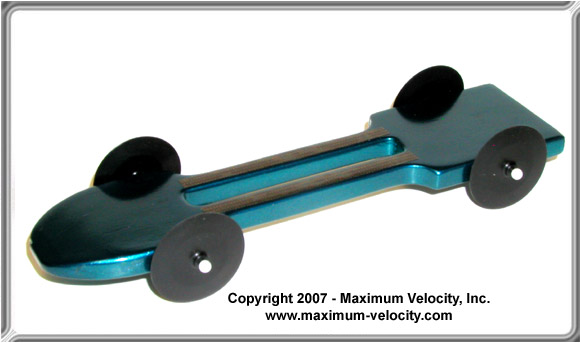 This is a prototype of the Velocinator which my daughter ran in a Parent/Sibling race in April 2007. This was our first experience with the needle axle wheels. The car was very fast, winning the first two heats. It then slowed down and took second the last two heats. We later found out that the axles had bent, either from the force of the run or from the abrupt stop. After the race we bent then back in place and made a test run. It immediately went back to the original performance. Oh well, a lesson learned!

I am a divorced dad who has fought the good fight since my son was 3. He is now 10. This past December I gained additional custody of my son and I had an extra night that I could give to a scouting type event. With only a Wednesday night to devote to this, the only option for us was the Royal Ambassadors at my church. Luckily for us, they had not had their race; so when we joined the group in January we got to pick out our car kits the first Wednesday night.

I polled my colleagues at work, and gathered ideas for how to build a fast car.

My son added pressure by saying, “Dad, can we really do this?”

We sanded. And sanded. And sanded. We primed. And primed. And primed. We weighed, drilled more holes, sanded and primed again and again. Three of the four post office locations we used to weigh our car-in-progress had scales that appeared to be off by one to three-tenths of an ounce. By race day, April 14th, 2007, I was not sure if we could do this!

We buffed and buffed the axles with jeweler’s rouge until they shined like new money.

We helped set up the race track the night before the race; so we tried out our cars. While we were fast, it appeared we would not be the fastest.

On Saturday afternoon we took the wheels off one last time and buffed again. This time we sprayed the axles with silicon and then applied graphite.

Most of the time I wear a fake smile because the past several years have been a struggle. As I said, I/we have fought the good fight. But as Jeff’s name was called for having the fastest car for his first award, I smiled a real smile. Jeff smiled as well, and when he got his second trophy he had a tear in his eye. We did it!

Next year is our last year to race. While the above story highlights a win, the experience Jeff and I had being competitive with other experienced kids and adults grew our relationship.
Thanks for the opportunity to share this story; I’ll be using your products next fall.

Is there a national pinewood derby?

There are, however, several racing leagues which have “proxy” races. That is, cars are shipped to the race, the results of the race are posted on the Internet, and the cars are then returned. People can travel to the races if desired.

When you are making low-profile car, like your Wing design, how do you attach the weights?

The bottom of low-profile cars usually has rectangular “pockets”, deep enough to accommodate the weight. If tungsten beads are used for trim weighting, a series of 3/16 inch holes are drilled into the bottom. The weights are glued into the pockets with epoxy adhesive.

Should the tread surface of the wheels be lightly sanded for better surface traction?

Lightly sanding the wheels is good advice, but it is to remove surface imperfections, not to increase traction. In fact, the wheels should be somewhat slick to minimize friction. I suggest sanding the wheels with 600-800 grit wet/dry sandpaper (use it wet). If desired, you can then rub graphite onto the tread surface of the wheels. Just make sure to wipe off the excess with a rag.