This article on parental involvement in pinewood derby car building was updated and republished in Pinewood Derby Times, Volume 18, Issue 9. 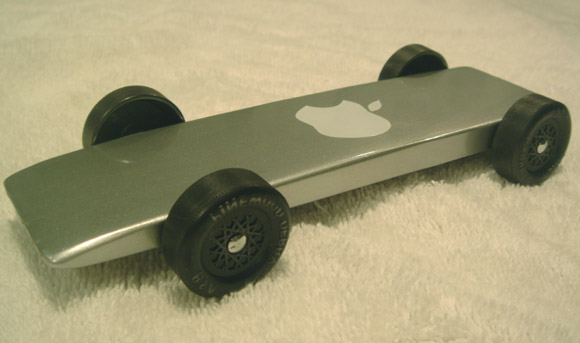 This year my son Robbie made a car that could fit into the Apple product line. Inspired by Robbie’s PowerBook we dubbed it “iCar”. iCar took 1st Place in Den, Pack, and District. Like most Apple products, it performed as good as it looked!

When my 7-year old daughter, Lauren, got the chance to participate in the Girl Scouts’ Powder Puff derby this year, I encouraged her to design a car that meant something to her. When I pointed out how much she enjoys Little House on the Prairie books, she suggested building a covered wagon.

We studied pictures of several covered wagons on the internet and after a lot of thought, realized that we could easily make a wagon with very little cutting of the block. We cut an angle on the front, higher at the top than the bottom, to give the wagon a more realistic look. With the full length of the block, the wagon looked ridiculous, so we cut the rear off right at the original rear axle slot. The body for this design has only those two cuts! (We used a saw to make a new rear axle slot.)

The top was hollowed out by drilling 18 holes, each ½ inch in diameter and about ¾ inch deep. My daughter loved using the drill! When she was done, I removed the remaining wood and squared up the sides with a chisel.

We used a saw to cut the lines in the sides so that it would appear to be made of planks. Toothpicks cut short made the vertical stakes and I carved a barrel for the side. The bench seat is made from pieces of a paint stir stick.

We did a little bit of sanding on the outside of the block, but not very much. It’s a wagon; it’s supposed to be rough! A water based walnut stain completed the finish. Not using any type of clear coat or sealer left the wood looking just like old barn (or wagon) boards. It was perfect!

The hoops for the top are coat hanger wire, bent around the chuck of my drill and inserted into holes in the sides of the wagon. The top itself is muslin with pockets for drawstrings sewn around the ends and sides. This was only the second thing my daughter ever made with a sewing machine.

After weighing it a zillion times on a self-serve postal machine, weights were screwed into the bed of the wagon (near the back), and a small figure of a little girl in a prairie bonnet, peeking out the back of the wagon, was glued in.

We knew this wouldn’t be a very fast design, but had a lot of fun building it together and hoped that we might win something for the design effort. In fact, it did win Best Designed Car, plus a couple of ribbons for heat events. We were thrilled. The awards meant a lot, but we had so much fun building it that we knew we’d succeeded before we’d even showed up. I was also pleased that my daughter did nearly all the work on the car, even filing the burrs off the axles. Who knew my ‘girly girl’ liked sawdust? 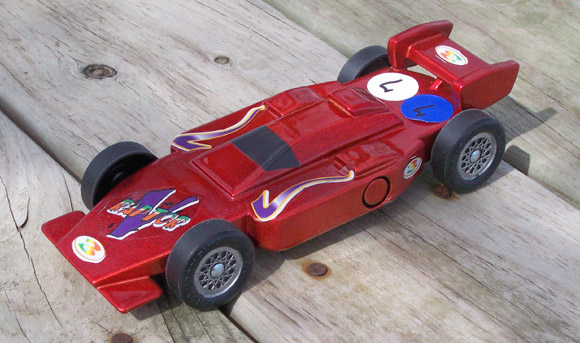 We used your Supercar kit and matched BSA wheels and axles to create this Indy car. We worked the wheels and axles, and used MetalCast paint from Duplicolor. It was a little extra work, but worth the effort. My son came in second in Webelos, first in the open class, and won the sportiest car award.

For our family, racing is not a hobby, it’s a passion. We are a deeply rooted NASCAR clan, so it’s ‘somewhat’ understandable that the 2005 pinewood derby season actually started for us in late 2004. We searched on the Internet for speed tips and how Packs from around the U.S. operate their events. It didn’t take us long to figure out that we weren’t the only ones that had sawdust in the carport that somehow got tracked through my wife’s freshly mopped floors. We discovered a guy named Stan Pope and his comments on www.maximum-velocity.com and again were amazed at the amount of tools and so forth available. It wasn’t long before the MADNESS started and we ordered one each of every tool Maximum Velocity had in stock.

We took the block of wood, axles, and wheels out of the box, and talked about what we had learned from the net, It was decided that the design was going to be a simple one; a wedge. As we trued the axles, rounded the wheels and bored out the void where the weights were to be installed we had a pretty good feeling about what we had learned. As we used each tool we discussed safe use, and the theory behind its use. As we built the machine we discussed the previous year’s entries and made immediate comparisons where we neglected things before; most notably the lack of attention to the wheels and axles – prepping them for speed. After the paint and decals were applied we aligned the wheels using the Pope method and broke in the wheels using the graphite and a Dremel tool. Once we completed the racer we took our cars from past years and lined them up next to each other. All we could do is chuckle; our new Hot Rod was going to be tough to beat. This year’s car was called ‘Sunday Money’.

Sierra Vista Pack 408 approached me and asked if I would be interested in running the Derby for 2005 (after I shared with them how others were running successful shows, and ours could use a little tweaking). The four-lane wooden track the pack had had for years only had two lanes that would run without the cars leaving the track, and the two that were left were inconsistent. Sure we could have remodeled the current track, but I remembered seeing something on the net and that’s when the MADNESS level increased. I ordered and donated a brand new, 4 lane aluminum track from www.besttrack.com and an electronic scoring tower. My wife is pretty handy with a sewing machine, so the crew went to the store picking out blue, gold, and checkered fabric for table cloths, etc. to create a very festive look. Once it was all set up, it was great to see the boy’s eyes when they saw the new stuff for the Pack. There was a new excitement as a points system was used, and each entry ran four times to determine the Den and Pack Champions. More racing in less time made it exciting for everyone.

‘Sunday Money’ not only looked fast but performed just like we had hoped – in the first heat, she pulled away on the flat part of the track. Based on what we had learned we knew it would get faster and, as the day went on she didn’t disappoint us. I noticed she was getting faster not just by the margin of victory but by how far she would stop on the braking section of the new track. Our car went on to win both the Den and Pack Championships that day, an undefeated record of 8-0. Next stop on the schedule was the District Finals. She placed first, bumping her record up to 11-0. Finally the Council Championship, where she received the first loss and finished second. ‘Sunday Money’ is now retired, but will always have its own place on the mantle with her career record of 14-1.

It amazes me how a seven inch-long, fifty cent piece of wood has generated so much excitement and intensity (and MADNESS) since the introduction of the Pinewood Derby in 1953 by Don Murphy.

Could you tell me why tungsten is needed for the flat cars like the Wing? Tungsten is very expensive!

The weight goals for a pinewood derby car are:

What is the advantage of putting your car in the oven to make it lighter if you still want it to weight 5 oz? Does this mean you can add more weight to a lighter piece of wood to make a faster car?

One way to make cars faster is to get the car to balance (front to back) at about 3/4 inch to 1 inch in front of the rear axle. This can be readily done on lighter wood by adding weight to the back. However, if the wood is heavy (often due to excess moisture), this can be more difficult. So people dry out heavier blocks in an oven. But, if your block is reasonably light, then there is no need to put it in the oven.

My son is in Royal Rangers, but their pinewood derby rules allow us to use the standard Royal Ranger kit OR the BSA kit. Would you recommend one over the other as far as speed?