During the pinewood derby season I receive many calls asking for assistance in selecting products for an upcoming pinewood derby race. Quite often the customer will state something like, “Wow, there sure is a lot to choose from. When I did this back in 19xx there wasn’t anything available”.

There certainly are a lot of products to choose from today. Whether it is tools, weight, software, tracks, etc., the pinewood market really exploded during the first decade of the 21st century. Sifting through all of the new offerings, I believe there are several key products and technologies that created a step change in competitiveness and in race management. Let’s take a look at these key developments and how they have made a huge impact on pinewood derby racing.(1)

Internet Retailing – 2000
Although not specifically related to pinewood derby racing the introduction of e-commerce opened up the opportunity to offer a wide variety of pinewood derby products directly to the user. Maximum Velocity began selling on the Internet at the end of 1999. Prior to that (to the best of my recollection), there was one mail order company (Hodges Hobby House) offering an assortment of products, and another company (Winning Edge) offering a speed tip booklet. By the end of 2001, there were a few additional companies offering a broad assortment of products. Now there are numerous companies offering either a wide or a unique selection of products. Regardless of the new products that have been developed, if it were not for Internet retailing, the pinewood derby builder would continue to have only a limited selection of products.

Tungsten Weight – 2001
I believe Maximum Velocity was the first retailer to offer tungsten weight for pinewood derby building. The first product was a tapered tungsten cylinder, which was actually a golf putter weight. There is an interesting story behind these weights.

In 2000, I received a call from a tungsten sales rep (who was also a pinewood derby dad), asking if we had considered offering tungsten. He had used tungsten for his son’s car, and thought that it worked great. At the end of the conversion, the sales rep offered to send me some samples. When I received the samples (an oddball set of parts), the only part that seemed interesting was a tapered tungsten cylinder (the thought of having custom made tungsten parts did not seem reasonable at the time). When I asked the sales rep about buying some, he stated that he didn’t mean to send me that part, as it was a proprietary part from a particular customer. Oh well.

But the part intrigued me, so I went looking on the Internet. The sales rep had indicated that they sold parts to golf club manufacturers, so I specifically looked at golf club dealers. Amazingly, a Ping putter was shown on a particular site, and it looked like the putter used the tapered tungsten cylinders for weighting. Ping is based in our area (Phoenix, Arizona), and I happened to know a manager at Ping, so I showed him the part and explained that I wanted to offer the part for pinewood derby racing. He said, “No problem, we will sell them to you.” So, for the next several years, we purchased the cylinders from Ping.

Now, the use of tungsten for pinewood derby racing is quite common. It allows for much more effective weight placement, and for extremely low-profile cars. Not only are cars more unique today, but the weight placement and aerodynamics have greatly improved performance.

Specialty Tools – 2002
Prior to 2002, the only readily available pinewood derby tool was the wheel mandrel. But then in the summer of 2002, Bill Launius contacted Maximum Velocity regarding a prototype tool he had invented, the Pro- Hub Tool. That tool was introduced in September 2002, and was quickly followed by the Pro-Body Tool and Pro-Axle Press. More tools followed, and now there is a broad selection of pinewood derby tools available from DerbyWorx. There are also some unique tools from other manufacturers as well, such as the Wheel Balancer, Axle Extraction pliers, and the Axle Install Support.

Now that these tools have been available for many years, it would be difficult to make a competitive car without the tools. Just like other types of technology, we have become accustomed to having the right tools for the job. By simplifying the building of accurate cars, pinewood derby specialty tools have increased the competitiveness of all pinewood derby races.

Race Computerization – 2002
Although some software packages were available before 2002, in that year Lisano Enterprises introduced Grand Prix Race Manager (GPRM). With the ability to create “perfect-n” and “partial perfect-n schedules”, this package helped to convert many race leaders away from elimination-style racing. Coupled with certificates, sound effects, and many other features, GPRM dramatically improved the quality, accuracy, and entertainment value of pinewood derby racing.

The common use of aluminum tracks has resulted in faster times (for a given track length) and generally tighter races. This adds to the excitement of the event, and has further increased the number of organizations that hold pinewood derby events.

New BSA Wheels – 2009
A major step forward for Cub Scout pinewood derby builders was the introduction of the improved BSA wheel in 2009. By using internal injection, this wheel did away with the mold mark on the tread, reduced the weight, and improved the accuracy of the wheel. This served to improve the competitiveness of Cub Scout Pinewood Derbies. Now there are fewer cars which don’t cross the finish line, and races tend to be much closer, increasing audience interest.

Not involved in a BSA-sponsored derby? In 2010, Maximum Velocity introduced a highly accurate light-weight wheel for their MV Car kit. This wheel also uses internal injection to eliminate the mold mark and improve concentricity. In races using this kit, cars are much faster and are much closer at the finish line.

(1) This is my list of pinewood derby step changes. If you have one or more additional items that that you believe are 21st century step changes, please send me your input and I’ll collect and publish them in a future newsletter. 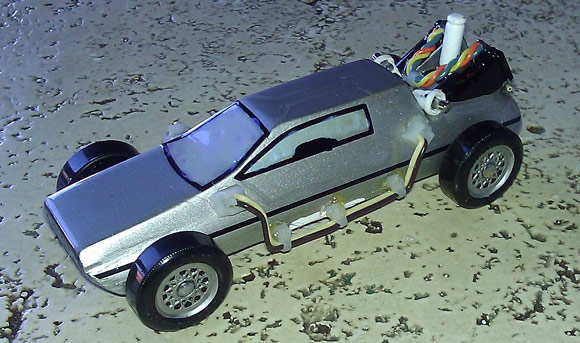 This car was created after my son saw “Back to the Future”. He wanted a car that was fast and would “travel through time”. I made two of the cars, one for each of my sons. The cars won creativity and speed awards.

The only thing I did to help was painting the car, helping with tools, and installing the wires. Unfortunately the 2nd car was destroyed during the younger boy’s play time. 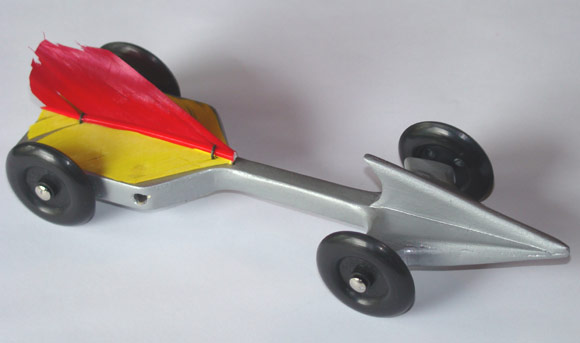 My grandson (Aaron Shain) and I built this car for his 2012 RA (Royal Racers) event here in Kentucky. “The Arrow”, as he calls the car, has a carbon fiber rod down the car center for extra strength. We hope it hits a “Bull’s Eye” at the races. (The hole in the side is for final adjustment of the car weight using tungsten putty when the wheels are changed for different races.)

Is the Pro-Rail Rider compatible with the Revell Axle Press?

Good question. Here is a response from the owner of DerbyWorx, which makes the Pro-Rail Rider Tool:

“The Revell Axle Press will not work for several reasons, but the two main ones are:

So, you would need to get a DerbyWorx Pro-Axle Press to use the Pro- Rail Rider Tool.

Can you do both wheel tapping and running grooved axles? Also, if you tap the wheel bore can you still polish the inside of the bore?

You would want to use either grooved axles, or tapped wheels, but not both together. If you tap the wheels, you would not polish them.

Last year I polished my axles and wheel bores excessively. It seems like the graphite will not stay on the axles or in the wheels. Any ideas?