(The ninth in a series of articles on cars that “stretch the rules”)
In 2008 I published an article on a two-wheeled car, running on diagonally opposite wheels (see Pinewood Derby Times – Volume 7, Issue 14).

I raced a car built using this technique in an Outlaw race in April 2008. The car did well, but due to the center weighting scheme, it didn’t take first place. 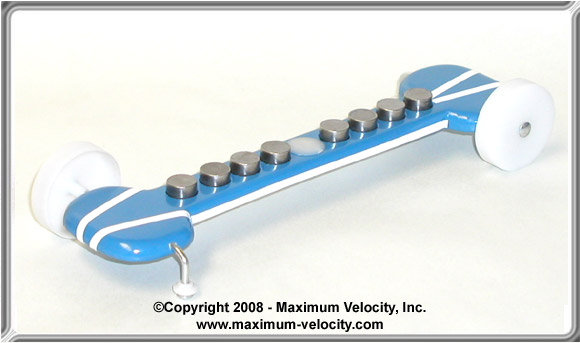 Later, a customer, Bob Wheeler, came in to the shop with his version of a two wheeled car. Modeled after a car that was entered at his pack’s race many years ago, it runs on the right-front, and left-rear wheels; the other wheels are off the ground. Unlike my car which is center-weighted, Bob’s car is rear weighted (balance point at 1-3/4 inch in front of the rear axle) by offsetting an underbody lead plate to the left. It is possible that this design could be made faster by using tungsten plates and shifting them further back. Nevertheless, the car is very fast; it has taken first in several races. 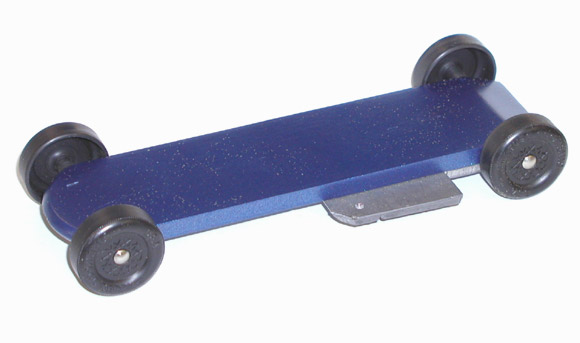 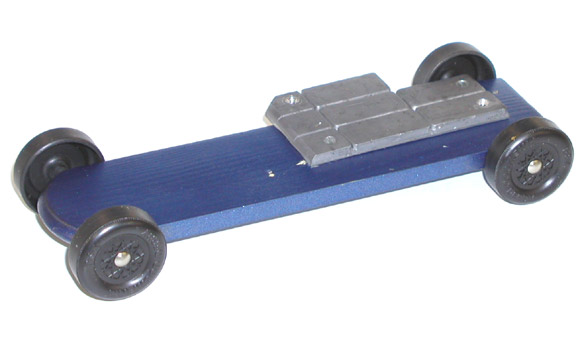 I was ready to let the idea of a two-wheeled car go into oblivion, until I ran across a car by Joe Tomelleri on the Derby Talk forum. 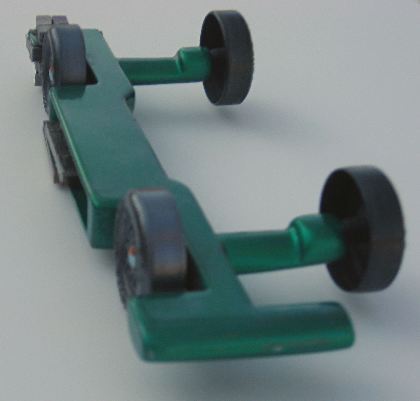 Joe’s car runs on two single file wheels. With rail-rider alignment, only the front wheel touches. This car was intriguing to me, so I decided to build a variation of Joe’s design.

On my design, I discarded the other two wheels, and replaced them with outrigger bars, tipped with small beads. The weight is tungsten (just over 4 ounces) and the wheels are light weight H-Tread wheels. The alignment is set to rail ride. Admittedly the car could be made more elegant by hiding the weight and giving it a nice paint job, but I kind of liked the functional look. 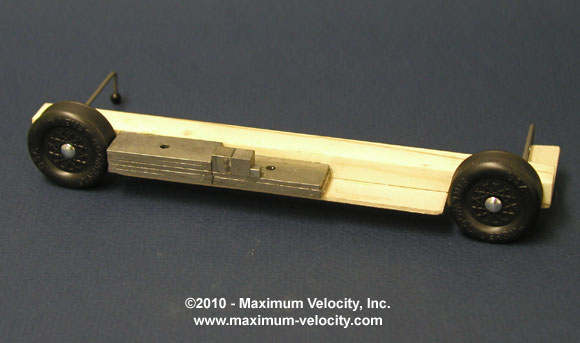 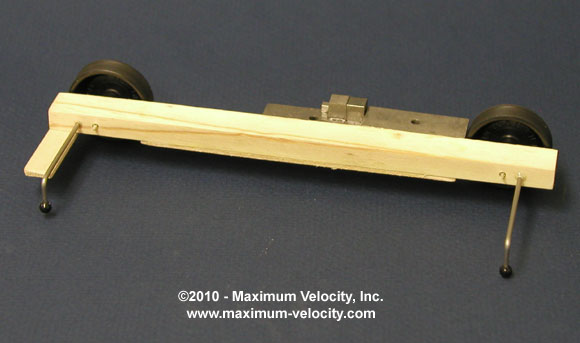 On the track, the car ran very smoothly. It turned out that the outriggers were not needed, because as soon as the car reached the braking section, the car flopped over onto its right side. When raced against my other two wheeled car (first photo), this new car wins by a car length.

Flush with success, I decided to remove the outriggers, improve the looks of the car (a little), and improve the speed with the introduction of Super Stock Needle Axle Wheels (SSN) from DerbyWorx.

I plan to run the car in the Outlaw Division of this year’s race on April 15. I’m sure it will create quite a stir, and I’ll let you know the results in a newsletter in October.

If you implement a two-wheeled car, please send me a photo and a description, and I’ll be glad to include it in a future newsletter.

Addendum
In the Outlaw Race, the car ran very smoothly, easily beating all but two cars (which were equipped with needle axle outlaw wheels, one of which I built). The car also received the positive crowd response that I was hoping for.

But in the third heat, the front “spoiler” broke off in the stop section. I didn’t notice the missing part until I was staging the car for the final race. Our rules state that the only broken car part that can be replaced is a wheel, so nothing could be done. Since the spoiler was needed to trip the finish line, the car got a DNF (did not finish) for the final heat and ended up taking fourth place. I could have argued that the car did finish; the problem was that the sensor didn’t detect it. But since I was the race leader, I didn’t think that was appropriate. Obviously, the spoiler needs to be mechanically reinforced, as opposed to just attached with glue.

Here are some examples of creative uses of a ducted fan on a pinewood derby car. 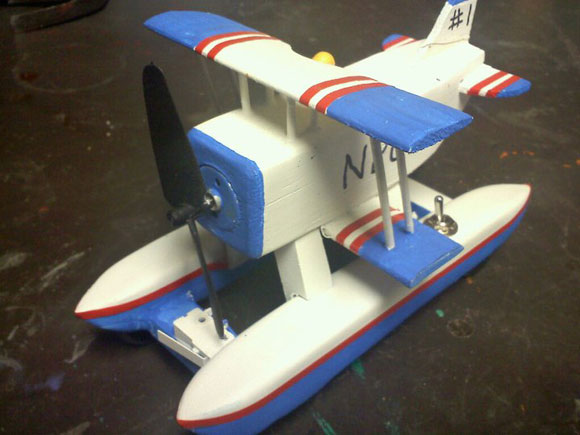 I enjoy reading the articles of all the dads that get creative and give their car a little extra help (more than gravity provides for us). Every year I make a car that uses “outside the box” thinking. This past year I went with a motorized biplane. I put a micro switch on the front to open the circuit when sitting at the gate. There is a main on/off switch in the back to enable the circuit, and a 9 volt battery hidden behind the motor. When the gate opens, the micro switch closes and starts the prop. It easily doubles the speed of its closest gravity driven competitor. I also added a micro switch on the bottom of the vehicle so the prop turns off when it hits the end of the track, but the plane goes too fast and shoots off the end of the braking section.

I hollowed out enough room in the pontoons to hide the wheels. The plane body and wings are balsa wood. After about the 5th run down the track it flipped over after crossing the finish line and it broke the prop and tail. It sure was fun to make and the kids sure enjoyed it. 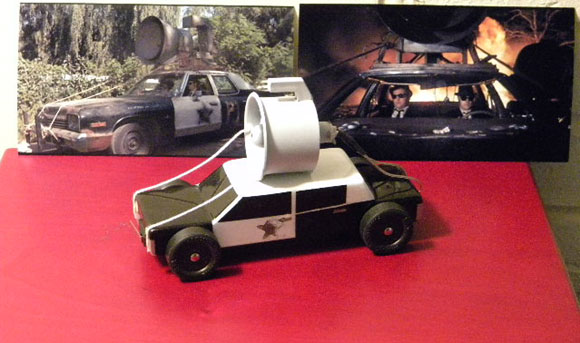 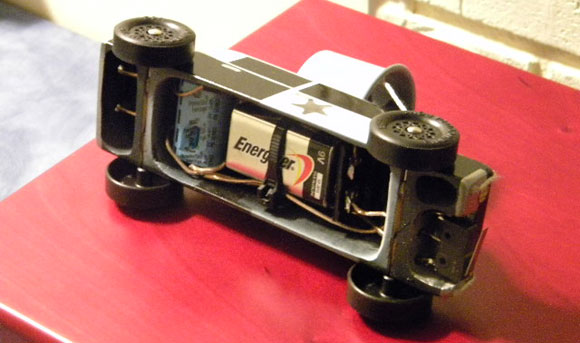 This car was made to resemble the Bluesmobile (from the movie “The Blues Brothers”). My son and I built it for the Dad’s Race at his pack’s pinewood derby event. We used parts from the Maximum Velocity Fan Car kit combined with capacitors as suggested in a newsletter article. The body is hollowed out to house all the parts with the exception of the fan, which was disguised to replicate the giant speaker (in the movie it was attached to the roof of the car with heavy rope). The weight is race legal at 4.95 oz. We did our best to make this car resemble the ’74 Dodge Monaco, ex-police car used in the movie, right down to the half rubbed out sheriff’s star and the Illinois state license plate “BDR-529”. It was a hoot to race, and the kids had a blast taking turns setting it up and watching it scream down the track. 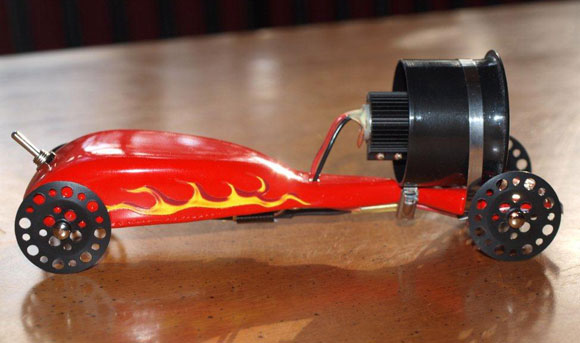 We used the parts from your propeller car kit, but went a different route on the car body. It turned a 1.83 seconds on 35 foot BestTrack.

How do you get graphite to stick to the shiny axles? Can axles be over polished for use with graphite?

Graphite does not stick to the axle. Instead, a coating builds up in the wheel bore. So, the shiny axle slides on the graphite coating, and not on the wheel plastic. The better the coating, the more heats the car will run before performance degrades. That is why it is important to spend time working in the graphite by spinning, adding graphite, spinning, etc. You can’t really over shine the axles, unless in so doing you reduce the diameter.

Do you have any suggestions as to where I could find some plans for a 32 foot, two lane track? In addition, where can I find a good single lane timer?

Regarding track plans, if you search for “free pinewood derby track plans” on Google, you will find several. I don’t have experience with any of them, but here is one you can try:
www.rahul.net/mcgrew/derby/track/

A single lane timer is sold by New Directions (maker of “The Judge”). You can find information and a photo Here.

At our pinewood derby meeting, three types of lubricant came up: molybdenum disulfide (MS2), graphite, and a mixture of both. Is one better than the other, and is there a significant advantage in one type over the other two?

In our testing, pure graphite (such as our Max-V-Lube) outperformed MS2, and graphite/MS2 blends. MS2 is a rather hard chemical compound that is used as a lubricant in situations where there is high pressure, high temperature, and/or the presence of electricity. MS2 can handle higher pressures and temperatures than graphite, and it is not electrically conductive like graphite. Of course none of these conditions exist in pinewood derby racing.

If you polish your axles well, then lube with MS2 or a graphite/MS2 blend, race a few times, then pull and inspect the axles, you will find that the MS2 has scratched the axles. This is counterproductive to speed.