Pinewood derby car designs can mean the difference between winning and losing a race. These gravity-powered vehicles require careful planning and design to optimize them for a winning performance. At Maximum Velocity, we’ve taken all the guesswork out of what makes for a winning design by offering insightful information and dozens of pinewood derby car designs that are proven to outperform the competition. 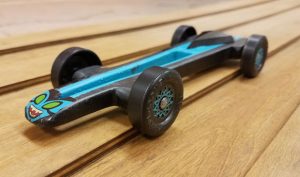 In order to build a successful pinewood derby car, you first need to understand the basics of how these cars move. Essentially, there are three forces at work during every competition. Gravity pulls the cars down the sloped track, gaining momentum. This momentum is used to cross the long, flat section on the way to the finish line. The force working against the car is friction, which is mainly manifesting in two spots: wherever two or more car parts touch each other, like the wheels and axles, and air resistance as the car races down the track.

To design a race winning pinewood derby car, you need to maximize your momentum while minimizing friction. This can be done in a couple of ways.

Because gravity is a constant force, there’s not much you can do to increase its effect on your car. However, be increasing your car’s momentum, you can better overcome the opposing force of friction. You can do this by properly weighting your pinewood derby car. There are two main factors to pinewood derby car weights.

First, you need to decide what kind of weight is best for your car. The higher the density, the more weight is added in a smaller amount of volumetric space. The less space a weight takes up, the more freedom you have in where you can place the weight.

The highest density weights available for pinewood derby use is tungsten and lead. Tungsten is the most popular weight used because in addition to its high density, tungsten is also non-toxic and environmentally friendly. While lead has comparable density, it is dangerous to handle, and should only be used by adults.

At Maximum Velocity, we also carry steel, tundra and flex weights, which fall between the scales of density and affordability. Depending on your design, different kinds of weight may be the best option for optimizing your car to gain momentum.

When weighting your car, the position of the weight is also important. While you should try to come as close to a max weight of five ounces, you also need to take into consideration where these weights should be placed on the car. The fastest and best performing pinewood derby car designs often have the weights affixed around the rear wheel axle. By placing the weight at the rear of the car, it can better push the car forward, gaining momentum and using it to move the car across the flat section towards the finish line.

In addition to maximizing momentum, the best pinewood derby car designs also incorporate techniques to minimize friction. You can do this in a few ways as well. 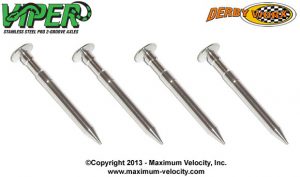 In general, we’ve found the grooved axles perform better than smooth axles. Not just because the grooves create a lube reservoir, but because they minimize the amount of contact between the wheel bore and axle shaft. Pro Grooved Stainless Steel Axles are the fastest axles and can be used with BSA, PineCar, Awana and MV wheels.

But just as important as the type of axle you choose is the lubricant you’ll apply to them. Graphite is a popular lubricant, and there are plenty of varieties available. However, for superior performance, you want high-quality, high-purity small flake graphite, which is exactly what’s in our Max-V-Lube. While WD40 and food oils are popular household items that can be used for lubrication, our dry graphite lube consistently performs better come race time.

There are additional ways to improve your car’s performance in your next pinewood derby competition besides maximizing momentum and minimizing friction. To learn more about proper axle alignment, aerodynamics and wheel preparation, check out our Five Keys to Pinewood Derby Performance. Further insightful information and techniques are also available in Speed to the Finish, a comprehensive booklet on everything pinewood derby.

If you’re not interested in lots of research on what makes for a competitive car, then check out Maximum Velocity’s collection of Car Plans. Each booklet contains winning pinewood derby car designs, in addition to helpful diagrams, woodworking tips and more.

For the best pinewood derby car designs, products and techniques, trust the experts at Maximum Velocity!