Since then several people have questioned the validity of the results of that test, so the test was reran, making sure that as many variables as possible were eliminated or more tightly controlled. Today’s article documents the results of the new moment of inertia experiment.

Another real-life example of the effect of “I” is in figure skating. When a skater wants to spin faster, the arms and legs are pulled in close to the body. This reduces “I” resulting in a more rapid rotation.

Affect Of “I” On Pinewood Derby Cars
“I” affects pinewood derby cars in two ways:

Experiment Setup
A special car was used that allowed the weight to be either spread or focused (see Figure 1). 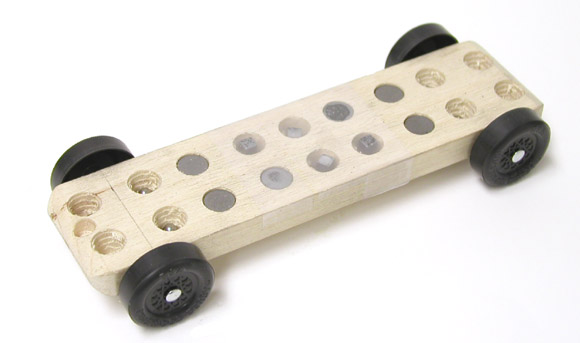 To maximize the change in “I”, center weighting was used. In addition, the following equipment was used:

The wheels were not removed or adjusted during the test. The only change was the positioning of the ballast weight (maximum or minimum “I”). Ten heats were run with each weight position. The high and low results were removed, the remaining times averaged.

Experiment Results
The results are graphed in Figure 2.

As you can see, the low “I” configuration was slightly faster than the high “I” configuration. However, the amount of difference in performance was only three milliseconds, while the standard deviation of the heats was between three and four milliseconds. So, the effect of “I” on performance was extremely small under these experimental conditions.

We are out of cars for the showcase, so I am highlighting our cars from 2009. Please submit your cars as detailed below – thanks. 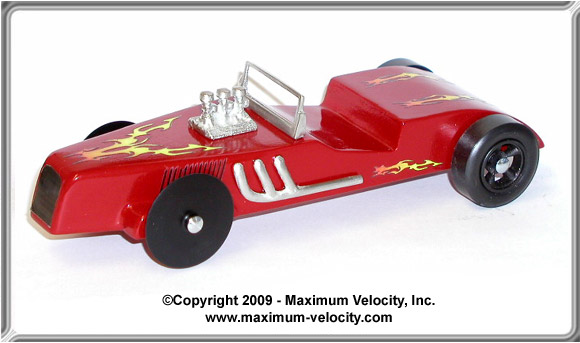 This car wasn’t particularly competitive, but I wanted to use up an extra PineCar kit that I had lying around. It took fourth place, in the Outlaw behind the extended wheelbase cars with four disk wheels (instead of the two disk wheels on this car). 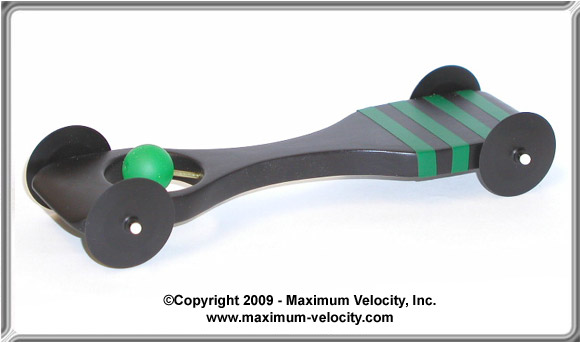 This car came from my son’s imagination. The green ball is a plastic marble that is just there to “look cool”. The car is painted with flat black paint, and trimmed with 1/4 inch green pin-striping. We used needle axle wheels, allowing the car to easily blow away the competition to take first place. In addition, it took third in design.

(This car, and its twin will be further discussed in an article on needle axle wheels later this season.)

My son and I are making “Bullet Bill” from Mario Brothers. I have shaped the body similar to a bullet — circular body that curves to a bull nose in the front. The body is currently the full length of a BSA car. My son wants to cut the vehicle in half length wise. The resulting vehicle would be about three and a half inches in length. My question is what is the draw back of shortening the vehicle?

From my experience the resulting car will be slow compared to the full length vehicles. This is for two reasons:

This short of a vehicle would certainly draw attention and be a fun car. But it would almost certainly be a relatively slow car.

We won our pack’s pinewood derby race and now are preparing for the District level race. Our car ran seven heats at the pack race. What troubleshooting should we do and what steps should we take to make sure our car is at peak performance for the District race? Do we need to take off the axles and re-lubricate the wheels? Re-lubricate without taking off the axles? Test for wheel alignment? I don’t want to mess too much with the car, but after seven heats and all the handling at the pack race I’m concerned that the car is possibly not currently at peak condition. Thanks!

Congratulations on the victory. Do you happen to have times for the seven heats? If so, and if they are not slowing down, I would not relube. You can certainly verify the alignment, but if you relube then you will have to make sure to get the lube broken in. When you do this, there is always the risk of damaging the car or slowing it down a little.

If the car had ran many more heats, then I would relube. But at only seven heats, it is probably running at peak performance. It should easily have enough life to complete the district race in good form.
However, it would be good to test the alignment to make sure it is still tracking as desired.

I was wondering if you could tell me approximately how much weight I should allow for my primer, paint job, an a few decals. The car with wheels and axles is now at 4.5 ounces. Should I bring it up to 4.7 or more before the paint? I just don’t have any idea what to allow for paint. I left a small cavity where I can tweak it on race day, but it is small so I need to come fairly close.

If you put on a few coats of spray paint, it generally is about 0.1 ounces (this number would increase with the number of coats). Brush paint generally weighs a little more, as it tends to go on thicker. So if you brought the car up to 4.8, allowed 0.1 for paint, then you can add up to 0.1 at the weigh-in.