I have always been fascinated by pinewood derby racing! From the time my neighbor came home with his first kit, I could not wait until I was old enough to join the Cub Scouts so I could build a car too. So when I became a Cub Scout in the fall of 1975 my Dad and I went to the local scout shop to pick up a kit and get an early start on the car; we just couldn’t wait for that race! That car was gold and black, and it was the coolest car ever because my dad and I built it. As cool as it was it was also fast, faster than everyone’s that year. But little did I know in 1975 what would eventually happen.

As the years went by we were involved with many cars. Several were mine, but others belonged to cousins, neighbors and friends that we helped over the years. When my son, Trey, became a Cub Scout it was even more exciting than ever. With the information age in full swing and the Internet starting to contain pinewood derby information, we could see there was a thirst for more racing information and supplies.

We had several items we had made over the years for building our cars. They were our little secrets, but I could see one guy on-line, Randy Davis of Maximum Velocity, was forging ahead in this new industry and I wanted to share a little of what we were doing. After testing our items, Randy said that they worked well and wanted to know if we would be interested in marketing them. My first thought was, “Wow, this could be a way to make a little racing money!” My second thought was, “We are a marketing firm who works with manufacturing, so I do know a little about sales.” I told Randy that I was interested in his proposal. Once again, I didn’t realize what was about to happen.

Maximum Velocity launched the Derby Worx Pro Body Tool, Pro Hub Tool and Pro Axle Press in October of 2002. We had no idea how they would sell, but with Randy’s hard work and great reputation, the tools took off, and Derby Worx was born. 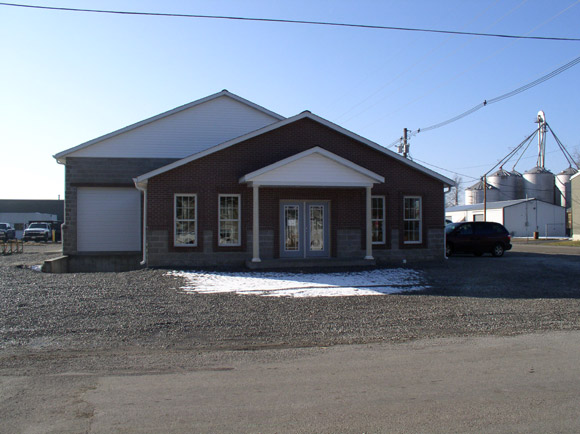 In 2005, we moved into a new facility in Millstadt, Illinois to help support Derby Worx’s growth. We added a few more products, and with the addition of an Okuma CNC1 lathe we started the Derby Worx Pro RS and SS wheel lines. In June and November of 2005 Derby Worx was granted United Stated Patent numbers for the Pro Hub Tool and Pro Body Tool. This was followed by a patent number for the Pro Wheel Shaver in 2007, and two U.S. Trade marks in 2008. Currently Derby Worx has six patents in different stages. 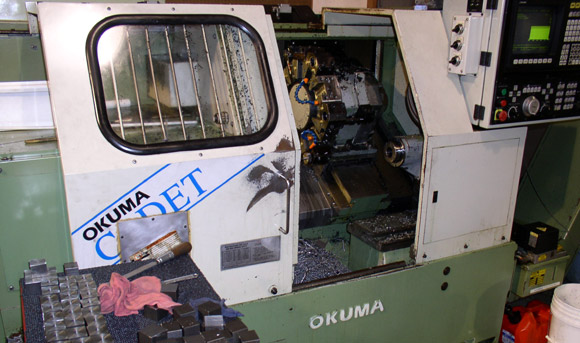 In 2007 we partnered with Jay Wiles and Warp Speed Inc. to expand our BSA wheel and axle line up. Jay’s NASCAR background brings the passion and precision to build the best, and both companies complement each other quite well. The Warp Speed facility is equipped with two Haas CNC’s that exclusively turn out pinewood derby wheels and axles. In 2007 DerbyWorx added an Okuma CNC mill for machining additional items like the Pro Rail Rider Tool. 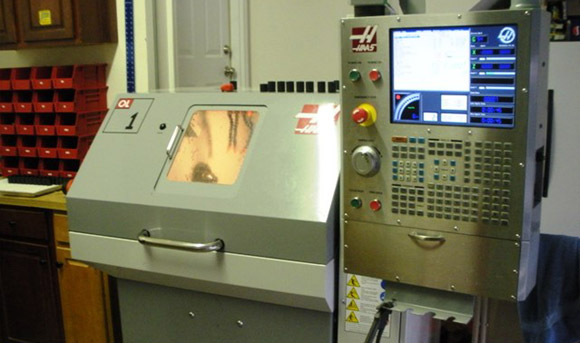 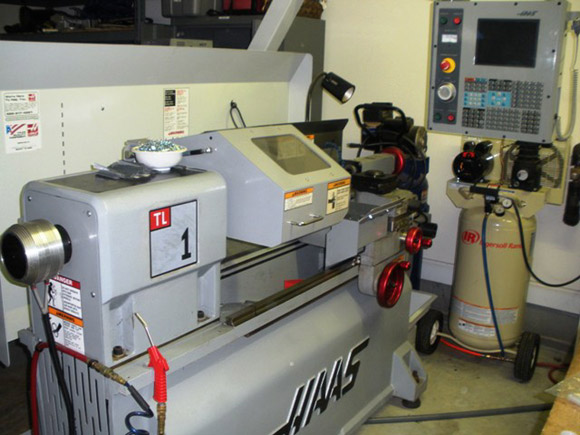 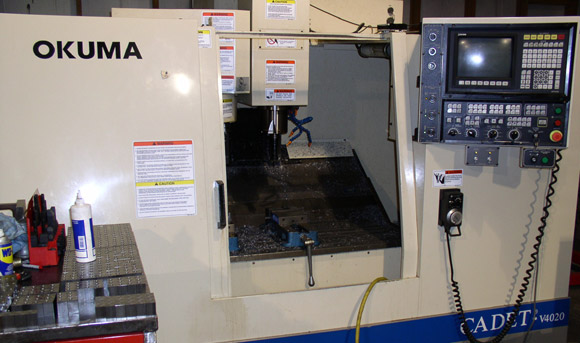 In this current 2008-09 season, Derby Worx has brought several new items to the pinewood derby market. We now have thirty-four different pinewood derby specific products. The six new products this season are the Pro Rail Rider Tool, the Pro Body Jig, Pro Awana Lite wheels, Pro Pine Car Lite wheels, Pro RS-X wheels, and Pro SS-X wheels. We are also very excited in having gained the endorsement of the Boy Scouts of America. Derby Worx supplies the Pro Hub Tool, Pro Wheel Mandrel, Pro Axle Press and Pro Axle Guide to the BSA. But the real success of Derby Worx is driven by our customers, who have accepted our products from the very beginning and have been very helpful with everything from tool applications and improvements to new ideas. Thanks! 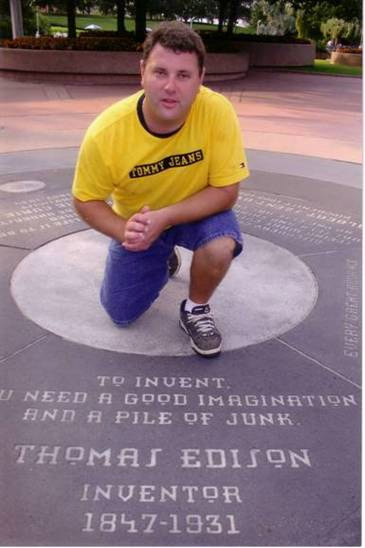 Derby Worx is a leading innovator, manufacturer and distributor of pinewood derby supplies. They are located in Millstadt, Illinois

1CNC stands for Computer Numerical Control. Basically this indicates that the machine is computer driven. 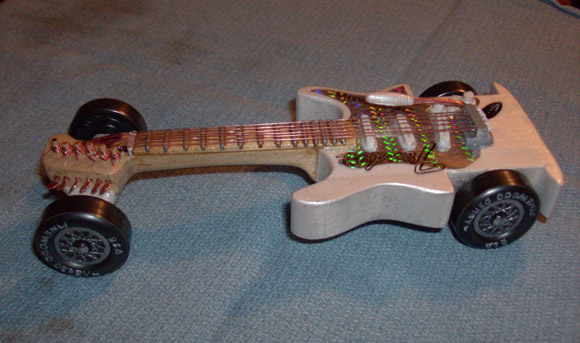 This is one of the more recent cars I have made. I downloaded a picture of a fender guitar, worked it into a pattern, used a little intuition, and voila … a Fender guitar car! This will surely be a hit among the kids (especially Guitar Hero fans — like my wife). 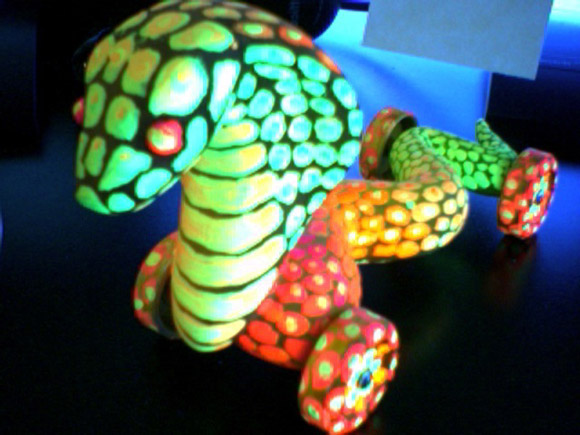 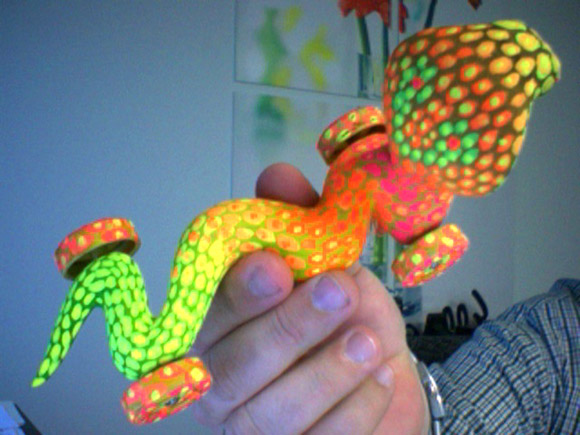 I always try to do a theme car every year that I don’t intend to race. I’ve got many interesting pieces of art on wheels, like this fluorescent cobra car that I did for a Halloween race this year.

After sanding with the finest sandpaper, what is the best way to use pumice to finish polishing the surface?

Pumice is generally rated about 1500 grit, so if you have already polished with a paper rated at 1500 grit or finer, don’t use pumice.

If you do use pumice, then you will want to take a small amount, add water, and mix into a slightly runny paste. Then put some of the paste on a clean, soft rag and polish the spinning axle for about 10 seconds. Then buff off the residue with a clean, soft rag.

To get a finer finish than pumice, you can use jeweler’s rouge, and/or a metal polish such as Brasso, or Mother’s Chrome Polish.

Twice, I’ve chipped the wood of the car when I was putting my axles into the slots. Is there a recommended way to do this without chipping the wood?

If you are using a BSA or BSA-compatible block, then our “Pro-Axle Guide” tool solves this issue.

To make sure nothing chips you can pre-install spare axles into the blank block. Then twist and pull the axles out with a pair of pliers. When you put in the real axles, they should go in without difficulty.