Grant’s face was twisted into a tight little ball of disappointment.

He had just received a second-place trophy for his age group at the Pinewood Derby.

The premise? Carve a miniature wheeled car out of a piece of wood, line it up with the other cars, and see whose car races the fastest.

Grant’s car was a minimalist beauty, painted bright yellow but so layered with graphite that it looked like sleek stainless steel. It zoomed fast, but not the fastest.

He was not pleased with his second-place finish. It took about 10 takes and five minutes of cajoling to capture a photo with his trophy. Even then, his forced smile didn’t quite cover his discouragement.

Seeing his frustration, I recognized one of those teachable moments, an opportunity to help my son learn an important lesson about graciousness, character and sportsmanship.

The truth is that “winning” is a concept that so many of us struggle with, myself included.

We all want to win. In some instances, we need to win.

We want to win the patient, win the client, win the opportunity, win the chance to speak on stage. We want to succeed. Earn a living. Make an impact. Nobody wants to feel like they are living a “second-place life.”

But what does “winning” mean, exactly?

After scouring the Internet for quotes and definitions, the one that rings truest to me is a statement that doesn’t include the word “winning” at all, but defines it nonetheless.

“Set peace of mind as your highest goal, and organize your life around it.”-Brian Tracy

To me, attaining that precious emotional state, peace of mind, is the definition of winning.

If you can enter into a competition, a conversation, a relationship, a creative project or a business venture and walk away knowing, “I truly gave my personal best, I regret nothing, I feel at peace,” then you have won.

What is more precious than satisfaction, contentment and peace of mind?

No external trophy or ribbon can give you peace of mind-or take it away. It’s an inside job.

That is what I tried to explain to my son amidst chattering kids and miniature cars.

He got to spend fun time with his dad working on the project. He got to make many trips to the Boy Scout store and the hardware store. He got to work with cool tools. He got to hang with his Tiger den and watch the thrilling races. He got to be happy for his friend who won. He got to try his best.

We’re still working on these lessons, and likely will be for a long time.

First, second or last. Triumph or “better luck next time.”

Peace of mind and no regrets means you have won.

A man walks into a restaurant with a full-grown ostrich behind him.

As he sits, the waitress comes over and asks for their orders.
The man says, “I’ll have a hamburger, fries and a coke,” and turns to the ostrich, “What’s yours?”

“I’ll have the same,” says the ostrich.

A short time later the waitress returns with the order. “That will be $6.40 please,” and the man reaches into his pocket and pulls out the exact change for payment.

Once again the man reaches into his pocket and pays with exact change.

This becomes a routine until late one evening, the two enter again.

“The usual?” asks the waitress. “No, this is Friday night, so I will have a steak, baked potato and salad,” says the man. “Same for me,” says the ostrich.

A short time later the waitress comes with the order and says, “That will be $12.62.”Once again the man pulls exact change out of his pocket and places it on the table.

The waitress can’t hold back her curiosity any longer.

“Excuse me, sir. How do you manage to always come up with the exact change out of your pocket every time?”

“Well,” says the man, “several years ago I was cleaning the attic and I found an old lamp. When I rubbed it a Genie appeared and offered me two wishes. My first wish was that if I ever had to pay for anything, I would just put my hand in my pocket and the right amount of money would always be there.”

“That’s brilliant!”says the waitress. “Most people would wish for a million dollars or something, but you’ll always be as rich as you want for as long as you live!”

“That’s right. Whether it’s a gallon of milk or a Rolls Royce, the exact money is always there,” says the man.

The waitress asks, “One other thing, sir, what’s with the ostrich?”

The man sighs, pauses, and answers, “My second wish was for a tall chick with long legs who agrees with everything I say.”

Here are some unique cars from our race held in November. 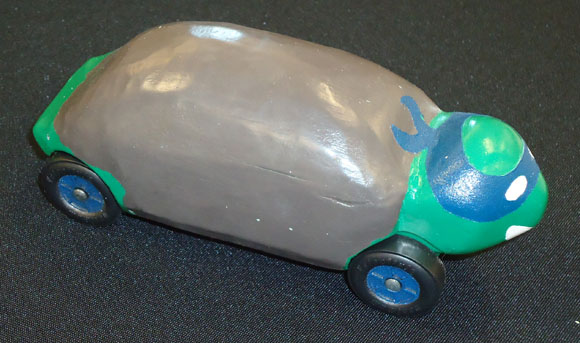 The TMNT car had to be fully hollowed out underneath to make weight. Not terribly fast but it won a design award. 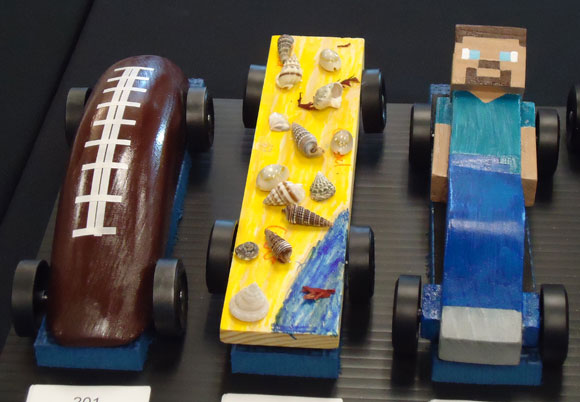 Both of these were design winners.

This cute car was actually quite fast, and it won a design award. But it had the nasty habit of shedding green stuff on the track. Yuck. 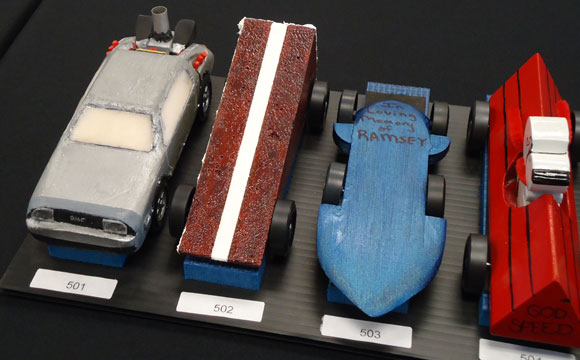 Some great cars from our parent-sibling race. Snoopy took first in design. (I really liked the DeLorean, but the participants pick the design awards; likely the kids were too young to recognize the DeLorean from “Back to the Future”.) 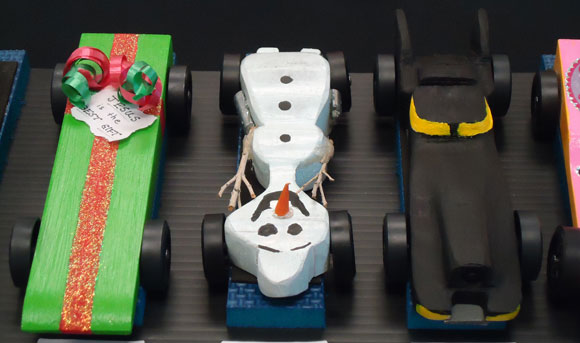 More cars from our parent-sibling race. Olaf took a design award. The other design award went to a Lightning McQueen car. Unfortunately, the photo of that car came out blurry.

Last night was the practice and “unofficial” weigh-in for our Pinewood Derby. This being the rookie season for my Tiger Cub we decided to practice positioning our car on the track. The first run was great – all went well and the car was fast. The second run was a cardiac tester!

THE SETTING: Four or five Tiger Cubs curiously milling around the starting gate (actually the launch pad for this story), two or three parents checking out the competition, one Webelo manning the starting switch, and two cars on the track.

THE LAUNCH EVENT: As the starting switch is thrown, the cars take off for a split second and then are abruptly jolted. One of the cars goes airborne (you know which one don’t you) in quite a spectacular fashion and climbs to an altitude of five feet above the launch pad. The car appears to be in slow-motion as it flies about twelve feet, trying desperately to defy gravity.

THE IMPACT: A padded concrete landing followed by alternating impacts with two folding chairs, and a final bounce to the concrete for good measure.

THE ACCIDENT INVESTIGATION: No mechanical defect was found in the starting mechanism; no earthquake reported or predicted, leaving only the four or five curious Tigers to interrogate.

THE FINDING: Two Tigers found it fun to grab onto the steel weight at the start. Apparently the cars started but a Tiger reversed the direction of the weight causing a starting pin to launch the car.

THE DAMAGE REPORT: The car was nicked and scuffed a little but still performed well.

CORRECTIVE ACTION: Keep little hands away from the machinery.

Should I be using Krytox 100 lube instead of the graphite I’ve been using from you for years? Is it faster?

If you are using BSA wheels and axles (which have a sloppy fit), then graphite generally works best. But if you were to use some oversized axles with the BSA wheels, then Krytox would work well.

However, I have received several e-mails from folks that have used Krytox 100 with BSA wheels and axles, and felt that the Krytox 100 was faster than the graphite.
Certainly, Krytox 100 is easier to use, cleaner, and lasts longer.