Feature Article
The Valuable Lesson My Father Taught Me
By C.J. Marshall

A while ago, I attended a Cub Scout Pack meeting, in which the group was holding a Pinewood Derby.

For those of you who were never in the Cub Scouts, a Pinewood Derby is a small wooden model race car.

However, it is not a toy car that you purchase ready-made in the store. Instead, it comes as an unfinished block of pine wood in a vague shape of a car. It also comes with a set of plastic wheels and a few other items necessary for assembly.

The whole idea of a Pinewood Derby is the person involved must carve the wood into the proper shape, sand it, paint it, and properly assemble the rest of the provided materials.

Once completed, the car fits on a wooden rack, along with other Pinewood Derby cars carved and put together by other competitors. The track is an elevated one, with a bumper or a stop that holds the car in place. Once the bumper is removed, the cars, propelled by gravity, race down the track to the end.

The first car to arrive is the winner. Cars are usually raced in heats, and at the end of the competition, the car that wins all the heats is the grand prize winner for the proud Cub Scout who owns it.

It’s nice to know that even in this age of flash-and-thunder video games and technology, some things have remained the same, and kids can still obtain thrills from simple carved pieces of wood on an elevated track.

Let me tell you about my personal experiences creating my own racer.

I was 8 years old when I got my Pinewood Derby. I was so thrilled when I looked at that piece of wood, wondering what kind of car was going to be produced by it.

My father helped me, of course. He did so by tracing the outline of a car on the block of wood, then telling me to carve it down to the line. He also warned me not to get impatient and go too deep, otherwise I’d ruin the car.

Well, I took my Cub Scout knife, went outside in the back yard and began to carve. I don’t think five minutes passed before I went back in the house, told my father how hard it was, then asked him if I was finished.

“You’re not even halfway done,” my father said, after looking at the car. “Go back outside and continue until you are finished.”

This continued several times, with me whittling a bit more, then bringing it back inside and my dad saying I wasn’t finished and to keep going. When I suggested he give me a hand with the carving, he said, “No, it’s your project; you do it.”

Eventually, after dogged persistence, and the fact I wanted that car done, I finally got the car whittled down to the point where my father had indicated. But it wasn’t over at that point, no sir.

Dad handed me some sandpaper, told me to go back outside, and sand it down until it was smooth.

You’re probably ahead of me by now, aren’t you?

Yes, I came back in several times and said, “Am I finished yet?” And each time Dad replied, “No, keep going.”

By this time, I had begun to learn a few things, so I didn’t ask Dad for any help as far as the sanding was concerned.

Sage advice he was free with, but the actual physical labor was my job.

I did have an inspiration and asked Dad about the possibility of using his portable hand sander to do the task.

“If you use my portable hand sander,” Dad said, “you’ll have nothing but a pile of sawdust.”

It seemed to me that Dad was deliberately making it tough. There I was, rubbing the wood over and over, seeming to get nowhere, when that sander could have done the job in seconds. But I finally did get the car sanded down to the point where it was acceptable.

Then came the painting part, which was fun. Dad even made a few suggestions, such as putting a screw at the top of the car to make it look like a radiator cap.

Finally, it was complete. Although I didn’t realize it at the time, I was very proud of the fact I had put the car together myself. I had also learned a very valuable lesson, although it would be a number of years before I fully realized what it was.

When I raced my Pinewood Derby against the other kids in my Cub Scout Pack, I noticed there were a small number of cars which had been beautifully carved, painted and assembled.

I looked at the cars and at the kids who “owned” them and knew immediately, even in my 8-year-old mind, that they could never have done such an expert job at creating their racers.

I knew that either their parents had done all the work, or an older relative had done the job of creating their racers.

As I grew older, I began to realize the importance of my dad insisting that I do the lion’s share of the work in creating my Pinewood Derby. He showed me that there’s just no substitute for hard work to get what we want. In addition, those that obtain something via hard work take much more pride in their projects and cherish them much more highly than things which are merely handed to you.

C.J. Marshall is a writer/columnist for The Daily/Sunday Review. He can be reached at: cjmarshall@thedailyreview.com

A strawberry and a cucumber grew up in the same garden patch. They were best buds growing up. As they grew older, they decided it was time to branch out, leave home, and see the world. So they hitched a ride on a nearby vegetable cart and took off.

Their first stop was at a local farmer’s market. Unfortunately, that’s where the trouble started. A big row broke out and they got separated, one of them ending up in a jam and the other in a pickle.

Here are some powered cars from our readers. 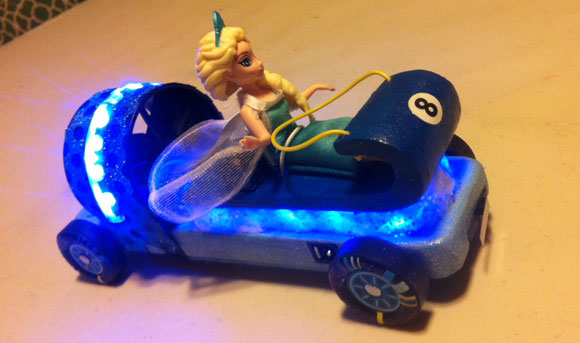 My daughter and I had a great time making the car with your kit and enjoyed showing it off at the girls’ pinewood derby activity night at the church. She went with an Elsa Frozen theme (not my choice :)). We wired lights to a separate tiny battery and they looked great. Thanks for your help!

I built a school bus with a small brushless ducted fan and some RC parts. I made it so that the back door was hinged for the exhaust. The first run was unpowered and completely unnoticed, but it still posted a time of 3.4 seconds. When I turned on the fan, it raced across the finish line with a time of 2.2 seconds! It weighed less than 4.5 ounces.

During the weigh-in at our race, I am often asked to give advice or assist children and their parents with making the final weight adjustment on their cars. I generally avoid doing the actual work, as I don’t want to damage a car, and of course the child/parent team really should do the work. But occasionally it becomes necessary for me to “get my hands dirty”.

I distinctly remember one occasion when a mom brought in her son’s car. The dad had to work and she was not at all comfortable with making a weight adjustment. Unfortunately, the car was about 0.2 ounces overweight, and no provision had been made for easily reducing the weight. The only opportunity appeared to be to drill into a rectangular weight epoxied into a pocket in the bottom of the car.

So, I took the drill in one hand, and used a rag to hold down the car with the other hand. The bit was placed on the weight, the drill started and I quickly realized that the material was not lead, but was likely the lead substitute (basically zinc) sold at hobby stores. If you have never drilled into this stuff, it is very hard. So, I took a firmer grip on the car, pressed a little harder with the drill, and then disaster happened. The drill bit caught in the weight, ripping it from the car, and at the same time tearing the car out of my hand. The car ended up (minus a wheel) on the floor, and I ended up at the mercy of the mother.

I am still amazed that she held her temper in check. Maybe it was the shock of the event, or maybe she had an amazing level of self-control. All I know is that I didn’t receive the verbal lashing that I was expecting.

Another man and I assessed the damage, and then we repaired the car the best we could. At the race I gathered enough courage to face the dad and explain what happened. His wife had already told him, and he had either already vented, or he also had an amazing level of self- control.

What happened to the car? It managed to stay in a few heats, but was then eliminated somewhere in the middle of the pack. For my own sanity, I have always assumed that it wasn’t going to win a trophy anyway.

I am now even more careful if I must work on another family’s car; and I don’t drill into zinc.

We are required to use the BSA kit with pre-cut axle slots, one slot being a little closer the end. We’re doing a basic wedge design, and assuming we do what we can to optimize weight, polish axles, etc., does it matter which end is the front?

On most tracks, it does matter. If your track has a slope, then a curved transition, followed by a flat section (typical track configuration), then you want the rear axle to stage as far up the hill as possible. This places the center of gravity of the car as far up the hill as possible, maximizing the potential energy. So you will want to use the slot closest to the end of the block as the rear axle.

Here is a photo of the wedge that we sell. You can see that the closest slot is the rear of the car.