Several times I have had people tell me that their car did great in preliminary events, but then in the finals the car lost speed. They asked me why that happened. I then offer several possible reasons:

I can’t say for certain that staging accounted for the lower speed, but it is certainly a possibility.

But how much does staging affect car performance? Certainly it has to have some effect, but is the amount of the effect really measurable? Let’s find out.

The car from Shifting the Wheelbase – V14, I11 was reused.
The car is equipped with Pro-Stock Speed Wheels and Polished BSA Speed Axles. These wheels and axles were cleaned, and then the car was re- lubed with Krytox 100.

On this car, the front-left wheel was raised, and the front right axle was bent for aligning. The car was set to rail-ride, by drifting left five inches over eight feet. 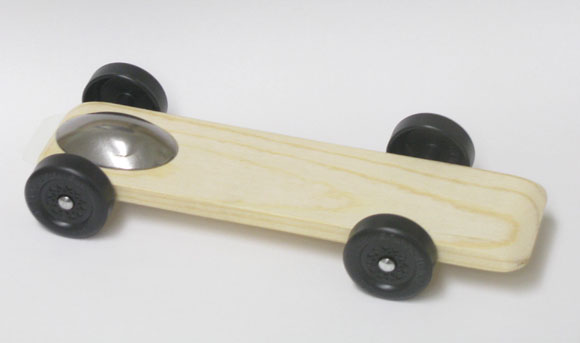 Figure 2 – Test CarEach staging variation was tested once, and then the cycle was repeated five times for a total of 30 heats.

The results were a bit surprising. I expected more variation, but to my astonishment the three starred results were the same, while the “Wheels Out” number was very close (this could just be statistical noise as the standard deviation was just over 2ms).

Clearly, the worst performance was attained when the car was shifted or angled right. This can be readily explained due to the raised wheel contacting the guide rail at the start. This contact would result in some energy loss, and thus reduce performance.

Conclusion
So, what we can draw from these results is that with a raised wheel, make sure that the raised wheel is not in contact with the guide rail at the starting line. This clearly is detrimental to performance. But otherwise, you don’t need to get too fanatical about perfect staging.

Now, I guess I’ll have to come up with some other reasons for slow performance in the finals.

An old, tired-looking dog wandered into the yard. I could tell from his collar and well-fed belly that he had a home.

He followed me into the house, down the hall, and fell asleep on the couch. An hour later, he went to the door, and I let him out. The next day he was back, resumed his position on the couch and slept for an hour. This continued for several weeks. Curious, I pinned a note to his collar: “Every afternoon your dog comes to my house for a nap.”

The next day he arrived with a different note pinned to his collar: “He lives in a home with four children — he’s trying to catch up on his sleep. Can I come with him tomorrow?” 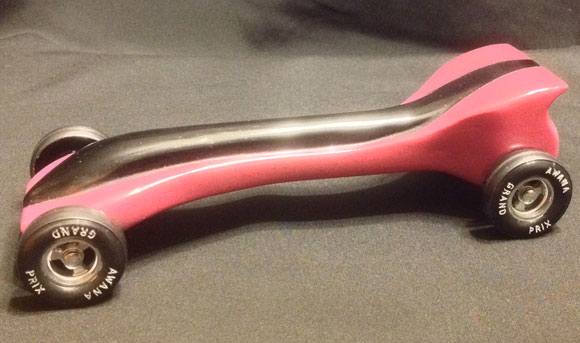 My daughter called this one the Raspberry Rocket, and so it was. It received first in speed. 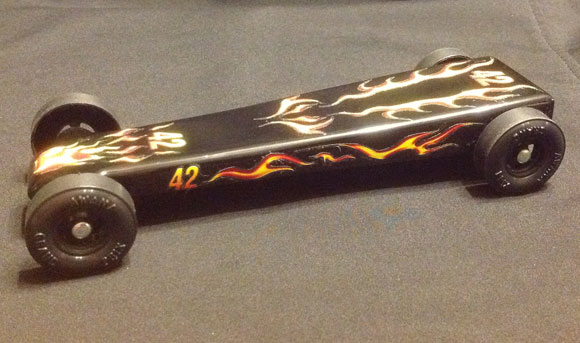 This car that my daughter and I made together was crazy fast. She went on to the regional races where she took first place there as well. Simple design, but it works! 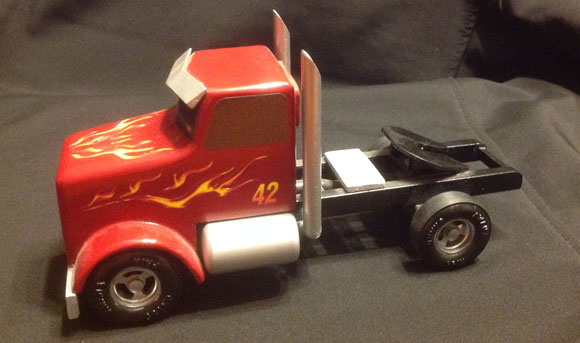 My son and I had lots of fun with this one. It was made to look like a Peterbilt Daycab which I had been driving at the time. It was pretty fast, but didn’t take first place. It did get best in show. The smoke stack broke off during the race. Fun times. 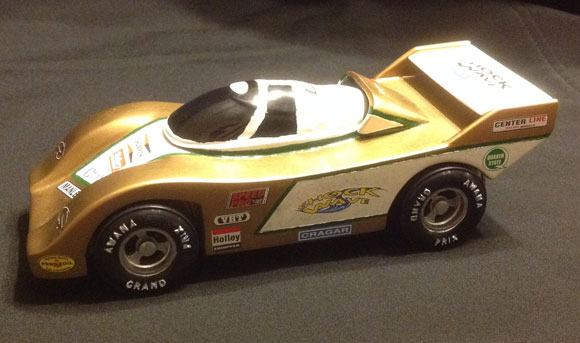 This was the first pinewood derby car my son and I ever built. It was the start of some fun years building cars together. This car was made to look like an IMSA GTP car from the late 80’s. It took first place in speed even though it had a very short wheelbase.

Pinewood Derby Memory
Attitude Is Everything

My oldest son Tyler was really excited about participating in his first pinewood derby race (of course so was I). The format our pack used involved every child racing 10 heats and recording only the winner of each heat. The results were displayed on a LARGE sheet of paper in the back of the gymnasium, so the boys could see how they were stacking up against the others. At the end of the day the car with the most wins was declared the winner.

The tension mounted for our whole family as we eagerly anticipated Tyler’s first heat. As the cars sped down the slope of the track and hit the straight, Tyler’s car began to inch ahead of the others. Our family exploded into cheers (rivaling any World Series home team crowd) when that car crossed the finish line and the electric #1 displayed above his lane. Each subsequent race generated even more excitement in our family as Tyler racked up 6 straight wins.

On the seventh race we were all disappointed to lose to the eventual winner of the day. The only reason I remember the car is because it was carved as a canoe with an Indian sitting in it paddling down the track. Tyler didn’t find that amusing at all.

We had worked hard to make our car as aerodynamic as we knew how. He took that loss pretty hard and began to tear up a bit and got a little agitated at losing the heat. “We aren’t going to have that attitude here son,” I told him. He promptly started to give me all the “But Dad” stuff, but I stopped him right there. “Why don’t you go over to the chart and count how many boys have not won any races yet,” I said. He came back with a much different disposition as he told me how many he had counted.

From then on Tyler has really displayed the attitude of “Do your best” and going beyond that to being genuinely happy for others who are doing their best even if it’s a little better than his.

In your opinion, which is better for wet sanding and polishing axles: a Dremel tool or an electric drill?

I prefer the drill. With the high RPM of a Dremel, you end up removing a lot more material than you do at a lower RPM. So, with a Dremel you have to be very careful to polish for a much shorter period of time. Also, if the axle head is off center, the high RPM of the Dremel can cause the axle to wobble, when really the shaft is straight.

I’ve been helping people with pinewood derby for several years, but have been thrown a curve with a request to help with a Royal Ranger’s derby car. Three questions:

Here are my thoughts: