I attended a masculine, macho, testosterone-fueled gathering recently. An event where only the most manly of men dare to show their rugged, brawny faces. That’s right, I went to my daughter’s Girl Scout Powderpuff Pinewood Derby race and picnic.

For those of you unfamiliar with what a Pinewood Derby race is, allow me to explain. In this particular case, all the little girls in my daughter’s troop were given a Pinewood Derby kit that they were to assemble and decorate with a supervising adult. The kit consists of a block of wood (presumably pine), four plastic wheels and four small, silver nails, hereafter referred to as “axles.” The supervising adult helps to shape and paint the car and apply the wheels and “axles” so the little girls don’t hurt themselves or have to have a turpentine bath. The girls then all gather together to show and race their cars. Afterward, trophies are handed out for the fastest cars and the Best of Show. Then you eat hot dogs, hamburgers, pasta salad and brownies.

If you ever want to see a group of guys on edge, try attending a Pinewood Derby race with a bunch of dads. I watched as they stood around the display table prior to the race. I can compare it to a group of NASCAR owners pacing along pit row before the Daytona 500. They all discussed among themselves what kind of band saw they used to rough out the shape of their car, how many coats of primer and sealer they had used to paint it, and where they placed the weights on the car to bring it up to the 5 ounce weight limitation. Most of all they talked about the amount of hours they spent sanding and polishing the aforementioned “axles” to get them to a glass-like finish and just what brand of graphite to use to make those “axles” even faster. They were all nervously sizing up the competition. No father wants his little girl to lose. He wants all the other fathers’ little girls to lose.

I am proud to say that I was not a part of this high-strung group. Nope, I didn’t have a care in the world at that time. In fact, I was much more concerned about the hamburgers. They smelled really good. You’re probably wondering to yourself why I was so calm, cool and collected. Well, this was not my first Pinewood Derby. No, I have a long history of building little cars out of wood and I was fairly sure about how my daughter’s car would perform that afternoon.

I did some mathematics this past week. That may not seem like a big deal to most of you but keep in mind, I was an art major. In the year 1973, I was in my first year of Cub Scouts and my dad and I made our first Pinewood Derby car. For means of full-disclosure, it was actually a truck. It was yellow and red with sky-blue windows. I can still picture it majestically sitting atop the Pinewood Derby track. Words alone cannot come close to describing its beauty. In my first heat of my first Pinewood Derby race, my yellow truck streaked out to the lead of the other three cars in the heat and barely held on for the win.

Now you should know that in the world of competitive Pinewood Derbying, the races are based on a triple-elimination basis. As long as you win, you’re okay and you get to keep racing. As soon as you don’t win three times, you’re done.

With that first win under my Cub Scout belt, I was on top of the world. I was unstoppable. But just to be on the safe side, before my next race, I decided to squirt some more graphite on the “axles.” In my mind, my yellow truck would only become faster. But for some unknown reason, maybe it was a chemical reaction, atmospheric conditions, or as I have claimed throughout the years, dastardly sabotage, my truck got slower. In fact, when they dropped the starting gate on my next race, Old Yeller just sat there while all the other cars roared down the track. That first win would prove to be my last. Throughout the rest of my Cub Scout career, I would never again experience victory as I would always be three races and out.

And then my son became a blue and gold neckerchief wearer. I thought that this would be my chance for redemption. But alas, in all his years of scouting, although we took home trophies for Best of Show, our cars were always out after three races.

Now here we were, on a breezy Saturday afternoon in 2013, 40 years after my first taste of Pinewood defeat. Yeah, I was pretty sure how my daughter’s car would perform. I joked to my wife that the car would probably go faster if we would have left it in the box. But I kept a smile glued on my face as my little girl proudly approached the starting line with her hot pink car. It may be wrong, but I prayed as they dropped the starting gate.

On the way to the race, I explained to my daughter that winning wasn’t everything. I told her that she probably shouldn’t expect to win and that she should just try to have fun. She assured me that she would be happy no matter what the outcome. 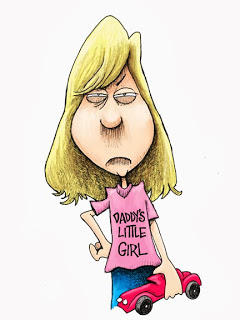 As her car finished in third-place, I realized that my daughter is a little bit of a liar. The steely glare that she gave me, made me realize that happiness was not on the menu. As she sullenly sat on the park bench waiting for her next race, I could tell she was determining the type of nursing home she was going to place me in someday.

As she approached the starting line for her second race, I was trying to figure out my escape plan. Her car might not have been the fastest but I was pretty sure she could pummel me with it. As the cars started down the hill, I silently said another prayer. Through my squinted eyelids, I saw a flash of hot-pink cross the finish line in first place. We had done it! The curse was over! Four decades of defeat were in my rearview mirror! I might get to go to a slightly nicer nursing home!

When the day was over, she ended up winning one more heat before ultimately ending up in the top seven cars. I don’t think she truly understands what those two wins represent, but I do. The forty years of shame and humiliation that I brought upon the House of Wallace were over. It was a good day.

And the hamburgers were delicious.

Greg Wallace writes a column for the Bureau County Republican newspaper in Princeton, Illinois. You can follow Wallace’s blog at
gregwallaceink.blogspot.com

Today’s cars are from Don Brown.

In August of this year the National Sprint Car Hall of Fame and Museum in Knoxville, Iowa held its first inaugural National Pinewood Derby race. The rules were quite simple: 5 ounces maximum weight, must be sprint car appearing with the wings from the Revell sprint car kit, and must have four wheels.

I purchased three Revell kits and did some serious work to make the cars look like a current sprint car. After the bodies were shaped, sanded, painted and weighted, I called on my good friends at Maximum Velocity for the best wheels and axles. The car I entered in the race used SS needle axle wheels with the needle axle upgrade kit. I countersunk the SS wheel to accept the bead retainers (I found out that the race required wide wheels). The other two cars have X-Lite needle axle wheels. After some polishing and fine tuning, the cars ran straight and fast.

Cars showed up from all over the country for a fun afternoon of racing at the Museum. I’m proud to say that at the end of the day our Halibrand-sponsored, red, white and blue sprinter won the “A”-main and was crowned National Champion. 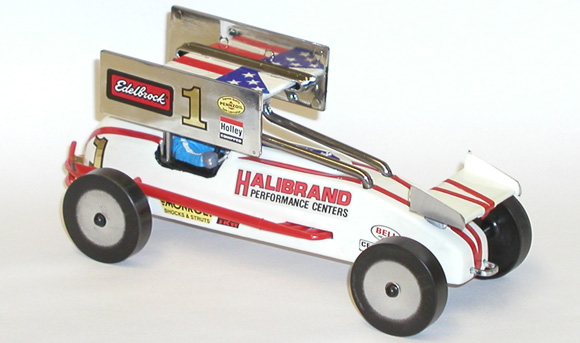 The National Champion car. Parts were added from a plastic model. I also narrowed the car body and used metal tubes to accept the needle axles. 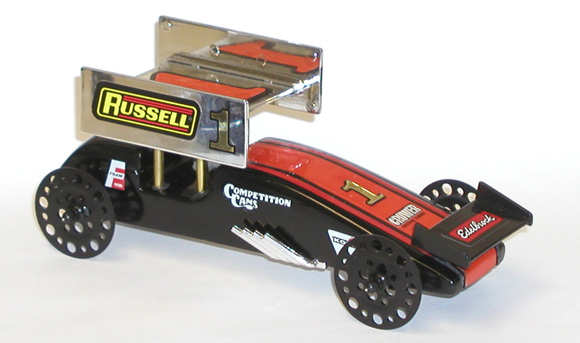 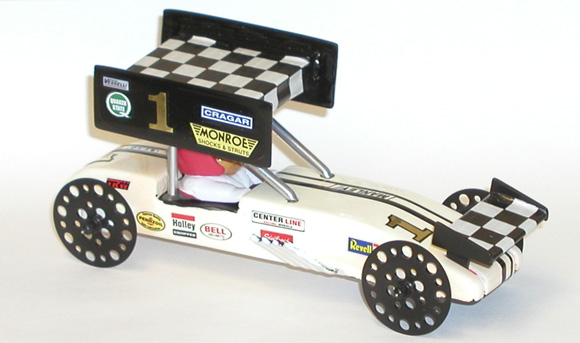 I just read a question and answer article in your newsletter and there was mention made of a balance point. What is that and how do you do it?

The balance point (also known as the COG-center of gravity), is the point at which the car balances (like a teeter-totter) on the edge of a ruler or COG Stand. Generally, it is measured from the rear axles.

In the photo, the balance point would be the distance from the rear axle to the balance bar of the COG Stand.

Unless the track is extremely rough, a good balance point is 1 inch. On a very smooth track, you can generally set the balance point at 3/4 of an inch safely. You can go less, but you would need to implement rail-riding alignment, have an alignment board, and preferably have a real track to test, align, and tune. League racers set the balance point extremely close to the rear axle, but they are running on the fine edge between peak performance and instability.

The risk of having a small COG is that the front wheels can lose traction, resulting in rear-wheel steering. This is evidenced by the car zigzagging back and forth around the center guide rail, which greatly reduces speed.

Would stock BSA, PineCar, or Awana wheels be the fastest on Awana axles, if the rules allowed this?