On February 4, 2009, I published an article on a lubricant test using the “Tilted Plane” method for measuring a friction angle, from which the coefficient of friction (μ) can be calculated. That experiment compared Max-V Lube with MS2 and TS2, and debunked some of the hype surrounding those lubes. You can read the article Here

Since then I have collected a few more lube samples, so I decided to pull out the testing apparatus and go another round.

Lubes
The first lube of interest was Boron Nitride. Boron Nitride is a common industrial lube used (among other things) as a mold release agent, and as a coating for bullets. It is a white powder with an appearance like powdered sugar.1 The two versions I had for testing had a 1.0 micron and 10 micron particle size respectively. These lubes were compared with Max-V Lube graphite.

I also had two types of Methyl-Silicone, a 5 cSt and a 10 cSt version.2 Silicone is often suggested as a good lube for pinewood derby cars. In my experience this is true; however, I have found that silicone lubes tend to last for only a short period of time, limiting the usefulness of the lube for pinewood derby racing. However, I decided to give it another try. The Methyl-Silicone lubes were compared with Krytox 100 (5.14 cSt at 40 deg C).

Experiment Setup
The tilted plane apparatus is shown in Figure 1. The crank causes the glass surface to slowly tilt, while the angle measuring device shows the current angle. For sliding blocks, Delrin plastic was machined into blocks of the same size and weight, with very smooth and flat surfaces on two sides. Separate blocks were used for each of the lubes. 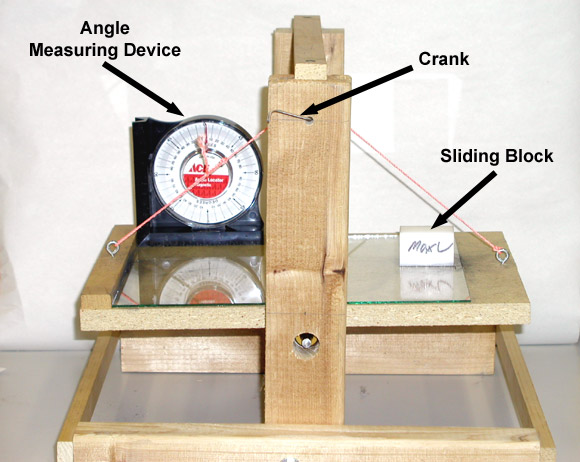 Experimental Procedure
The glass plate on the tilting apparatus was first cleaned thoroughly with a glass cleaner, then with water. This cleaning was repeated each time the lubricant was changed.

For the liquid lubes, one surface of the block was coated with the lube, and then wiped off with a clean rag. The block was then placed on the glass and slid back and forth. The glass was then slowly tilted until the block slid to the downhill side of the glass. The experiment then proceeded as with the dry lubes.

Experiment Results
After all of the tests, the results were averaged. μ was then calculated for each of the lubricants and for the control block. The results are shown in Figure 2.4

Conclusion
There does not appear to be any advantage to methyl-silicone over Krytox 100. The evaporation rate of the silicon lube is just too fast for pinewood derby racing.

However, Boron Nitride might be useful as a pinewood derby lube for races requiring a white lube. I did a few weighted-wheel spin tests on a wheel lubed with Boron Nitride 10 (applied with a pipe cleaner through the bore). It spun reasonably well, but more testing would be needed to ascertain whether the lube would be a good choice. One disadvantage is that the raw cost of Boron Nitride 10 is considerably more than graphite.

1Boron Nitride is not to be confused with the “Dry White” lube offered by PineCar and others. Dry White is a PTFE (Teflon) based lube.

2Methyl-Silicone is the main formulation of silicon for use as a lubricant. “cSt” is the abbreviation for Centistroke, a measure of the viscosity of the substance.

3The Boron Nitride tended to clump up on the plastic, which greatly increased the tilt angle. So, before sliding, the excess had to be wiped off.

4The Delrin blocks had a different weight than those used in the previously cited experiment, so the results cannot be directly compared (μ changes with weight). 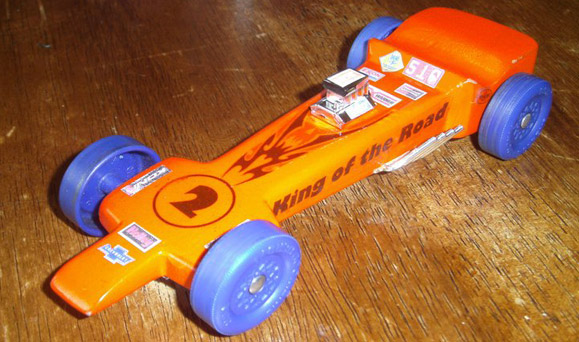 Here is Bryson’s car that took fourth place. My son and I built two cars from the ground up – together. This year, we hope to do even better! 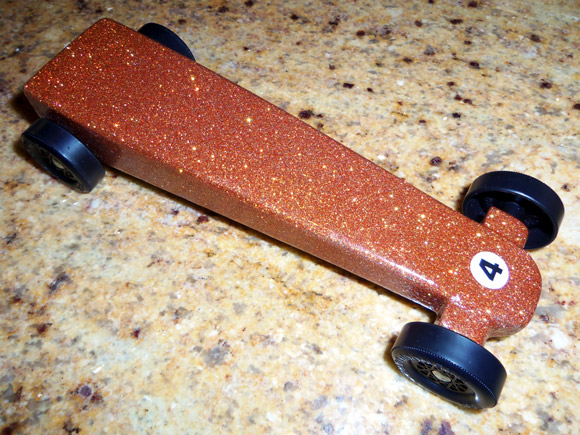 This Wedge GT took first place in the den. We used Krylon Orange Glitter Blast and many coats of clear. 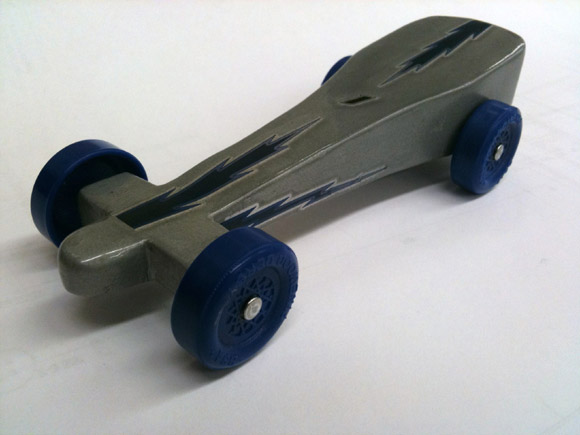 This is my son Layton’s first pinewood derby car.

Is there any advantage to lowering the front end of the car by drilling the front axles slightly higher on the block than the rear axles?

As long as you meet the 3/8 inch clearance specification, there is a very slight advantage to lowering the car body. The purpose is to lower the center of gravity of the car. If you just lower the front wheels, there would likely be little effect as the COG is usually closer to the rear of the car.

I notice most of your kit cars have precut areas to attach weight on the bottom of the car. From my research it is recommended the weight be placed as high as possible. Are you seeing the same performance in speed with the weights down low?

I am not sure where you read that high weight is better, but that is not really true. Low weight provides more potential energy and better stability.

You can read more at about weight placement Here. Look for the section “Vertical COG – Up And Down”

Can I add flat magnets for the weight needed, or will it cause the car to be disqualified?

I would avoid magnets. It is possible that they could be considered a starting device if the starting peg is made from steel. Also, if there are any metal screws in the track, the attraction could affect the performance of the car.