My son brought his pinewood derby flier home from Cub Scouts exactly two weeks before the race. My first instinct was to throw it away and cross my fingers that my husband would never find out. Having lived through previous derbies, I wasn’t sure I was prepared for another one.

Weighing our marriage in the balance, however, I decided to disclose the race information. My husband furrowed his brow, grumbled something about short notice and got right to work.

With some trepidation, I will divulge what happened next.

The following instructions and warnings could either be used as pinewood derby navigation tools for families or simply as a pinewood derby cautionary tale.

Either way, I hope they prove helpful.

The Design
Your Cub Scout is free to choose any design he wants. That is, providing the design he wants has been pre-screened for outstanding aerodynamic qualities by Dad. Dad must then spend a minimum of one entire Saturday in the garage cutting, sanding, painting and spinning wheels.

Both his and the car’s.

The Cub is welcome to help but may also disappear for long periods of time to ride his Ripstick, play with friends or get a snack – all without Dad necessarily noticing his absence.

Painting And Accessorizing
A trip to the craft store is essential. Since the aesthetic fate of the car hinges on this trip, Dad should think twice before inviting Teenage Sister along. Should this error in judgment occur, however, keep in mind that the final product may well be a race car with a startling amount of bling. It could even end up ornamented with sparkly silver weights, a dozen or so gems (the tiara kind) and an ever-so-swirly letter “S”.

The Weigh-In
On the eve of the race, Dad will be unavailable, so Mom must accompany her son to have his car weighed. Once the car is found to exceed the maximum 5 ounce limit – which Dad had sworn would not happen – Mom should use the provided drill to make holes in the bottom of the car in an attempt to remove the surplus weight.

After several holes fail to do the trick, Mom will need to get more aggressive with the drill. This is a risky strategy, of course, because she might drill all the way through to the top of the car.

Should this unfortunate event occur, Mom can simply remove a gem from another area of the car and place it over the offending hole. In doing so, she will find that removal of gems doesn’t damage paint, which will give her another idea for shedding weight: taking off more gems.

If the scale still refuses to budge, Mom is allowed to mumble mild curses (under her breath only, kids will be present) while she drills more and more and more holes with the miniscule drill bit.

When approximately half of the car’s wood has been removed and its underside appears to have been caught in a crossfire of tiny bullets, the car will finally weigh in at precisely 5 ounces.

Later that evening, upon describing the problematic weigh-in ordeal to Dad, Mom should be prepared for the look of alarm on his face as he asks, “Did you drill the holes symmetrically? The car has to be balanced!”

Mom is permitted to react with passion, and not the kind Dad dreams about.

The Race
Mom will drag all her kids to the derby without Dad, who will be running late. It is imperative that she disguise her reaction upon seeing her son’s blindingly sparkly vehicle in the lineup alongside red, black and yellow cars boasting serious stripes and fire bursts of the traditional race car variety.

Just as the announcing begins and while Mom is trying to keep her 3- year-old from dismantling the track, she should expect her cell phone to ring and hear Dad’s panicked voice hollering, “Have you put graphite on the axles? You have to graphite the axles before the race!”

Moderate cursing from Mom is expected at this point, although she should try to keep it under wraps as much as possible.

Mom must speedily fish the graphite from her purse, toss it to Teenage Sister, yell across the gym for her to help graphite the wheels, continue to restrain her 3-year-old, and finally breathe as her son’s car comes in second place in the first heat.

At which point Dad will sprint in to take charge for the balance of the evening.

The Results
Despite the aforementioned stellar efforts of so many, the car will not place. It will, however, receive the distinction of being named “Weirdest Car” at the derby. As parents, try not to hold a grudge against members of the award title-writing committee. They certainly wouldn’t have seen this one coming.

The Take-Away
Weighing his marriage in the balance, Dad must be careful to never say this out loud.

But he will be inclined to blame the car’s losing status on all those holes riddling its undercarriage.

They were simply not drilled symmetrically.

About The Author
Susie Boyce and her husband have “successfully” navigated six Pinewood Derbies and have three more to go. Her column, “Momsensical,” is featured in several North Dallas area newspaper. Visit her web site at www.seriousmomsense.com

Cars with a military theme: 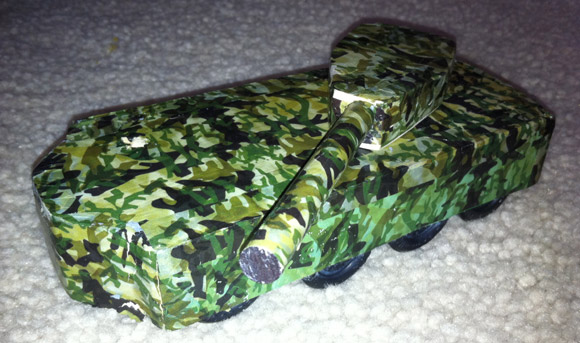 My son Cameron wanted to do a tank this year, and although it was challenging to stay under 5 ounces, we used balsa, lots of hollowing and cut down extra wheels to allow us to add 2.5 ounces to the rear. My son just missed a speed trophy, but was a unanimous design winner. A magnet turret mount allowed it to swivel and not fly off during the race. 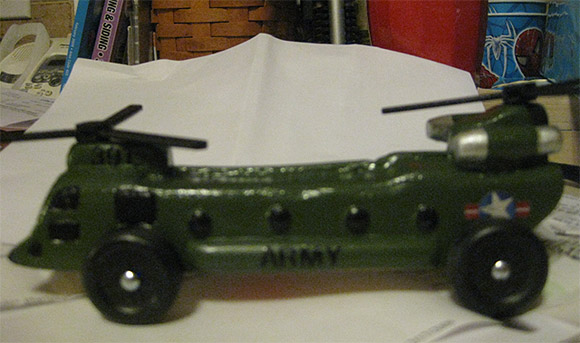 This Army Chinook Helicopter took 1st place in the open race in 2010. It used a standard block, corn-dog sticks for the propellers, dowel rods for the fuel tanks and engines. Scrap wood was used for the propeller housing and a coffee stir stick for the drive line between engines. 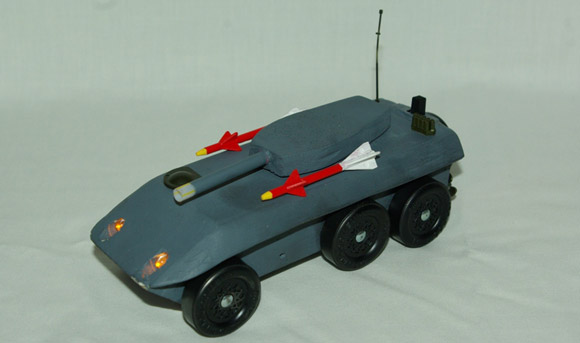 Attached are pictures of my son’s recent pinewood derby build. It is modeled after the Marine Corps LAV-25 Piranha Light Armored Amphibious Vehicle. It should have 8 wheels but two were removed to meet weight. You can still see the holes for the other wheels, which can be put back on. The main feature of the vehicle is that it has working headlights and taillights that can be turned on and off via a switch in the back. The spare tire in the back houses the battery for the electronics which are inside the car. It also has a working turret with a blinking red LED inside to simulate firing. It was a total hit at our pack races a couple weeks ago. It’s not the fastest car but by far the coolest car he’s built to date. 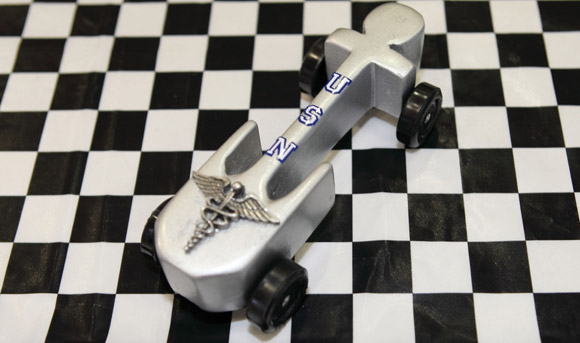 My son and I built this car for our adult race. It raced like an anchor, pretty slow but won best in design. I am active duty Navy and most of the Pack is made up of Marines. They didn’t really appreciate my car!

I was hoping to use an extended wheel base, but our rules call for the wheelbase to measure between 4 1/4 and 4 5/8 inches. The current wheelbase on our BSA block is 4 3/8 inches, so at best I can only get an additional 1/4 inch. I’m not sure that extra amount is worth trying to drill new holes rather than using the existing axle slots. What do you think?

I do want to set one wheel slightly higher so that only three wheels are touching the track surface. If we use the existing axle slots, what is the best way to achieve this?

Generally, it is worth drilling axle holes, especially if you can use a raised wheel. Can you shift the wheelbase back? If so, set the rear wheels at 11/16 inch from the end of the block, and the front axles 4-5/8 inch forward of the rears. By shifting the rear axle back, you can move your weight back, resulting in more potential speed.

If you do want to raise a wheel on a slotted block, it is best to deepen the front slot on one side. This can easily be done with a drill press, or a Pro-Body Tool II. On a drill press, use a #44 drill bit.

Does the rail riding technique cause a lot of friction on the dominate wheel? If so, what do we do to reduce this?

To reduce friction on the front, make sure to apply graphite to the inner edge of the wheel (the part that touches the lane guide).

We are adding tungsten cylinders to the top of one car to replicate “turbo boosters” and was wondering if epoxy or super glue will stick to the car even after it has been polished, or should we mask off a small area where we are planning to add the adhesive?

Epoxy sticks well to the paint, but I have not tried it over waxes. So, it would probably be best to keep wax off the area. Even better would be to drill shallow holes (1/16 to 1/8 inch) into the body where the cylinders will go. That way the cylinders will recess slightly, which will give them a lot stronger bond.

I strongly recommend epoxy over superglue. Epoxy fills gaps and has strength in all direction. On the other hand, superglue does not fill gaps and has poor sheer strength.