The front to back location of the center of gravity of a pinewood derby car (the balance point) has received much attention. Several experiments have been implemented which clearly show that a rearward placement of weight provides more speed on the typical track.

Experiment Setup
Of course this is just theory. In practice, the frictional forces involved may be so large that left to right weight centering may make little to no difference in alignment or performance.

To test this, I constructed a car on which the ballast weight could be adjusted left or right. Two 3/8 inch holes were drilled from left to right through the rear of the car, and two 1/2 ounce threaded tungsten weights were inserted into each of the holes. The back of the car was made relatively tall so that the weights could extend out of the car on both sides without interfering with the wheels. 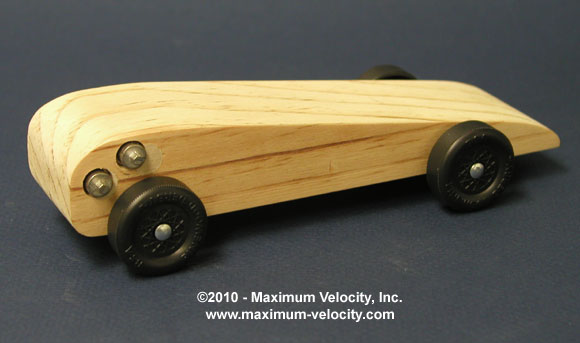 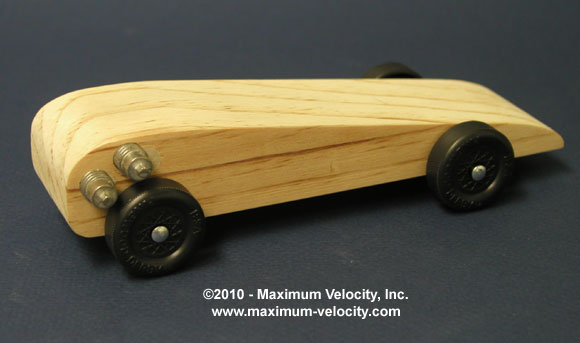 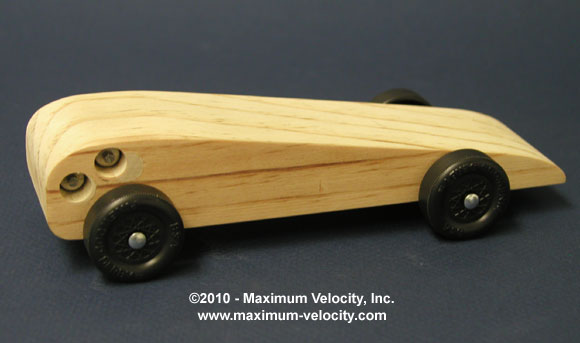 The weight was then adjusted such that the weight was evenly balanced on the rear wheels. This was done by placing the two rear wheels on two identical scales, and placing the front dominant wheel on a piece of wood at the same height as the scale platforms. The weights were then moved until the scales showed equal weight on both wheels. Note that the weight is shifted to the right of the car and extends partially out of the body.

Next, the front dominant wheel was slightly adjusted so that the car would roll straight on an alignment board.

The weight was then adjusted both to the right and to the left to see what affect the weight position would have on alignment.

Results
Surprisingly, the position of the weight had little to no effect on the alignment of the car. Regardless of the location of the weight, the car tracked within a two inch band on every run. The variance can be accounted for by the inability to place the car in the same exact position on every test.

Conclusion
Placing the weight such that the weight is evenly distributed on the rear wheels is the theoretical correct technique. However, a different placement will not have any significant effect on the performance of the car. 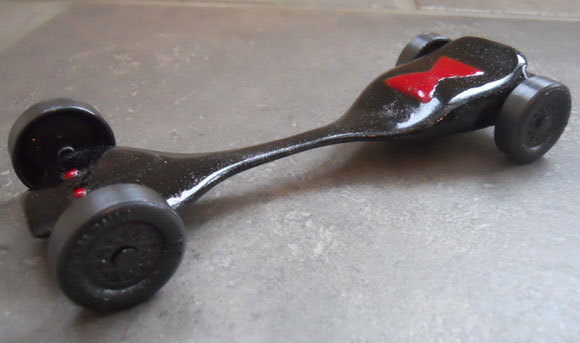 This car belongs to my son Ashton, and was raced when he was a Tiger. He placed first in his class and went on to win Grand Champion. He also participated in the district race, placing third in his class. We are very proud of all his efforts. 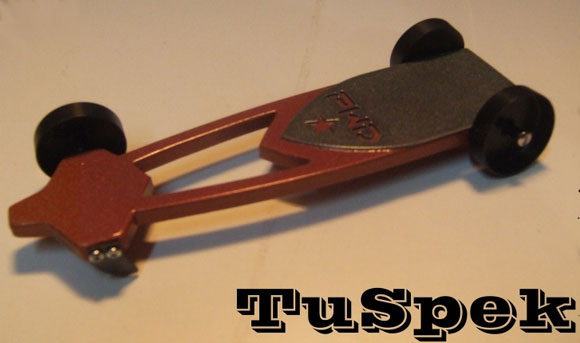 This is my latest car, TuSpek. It will be running in the new “Spec/Tuner Division” at PWDRacing.com in 2011. A minimal amount of modification is allowed, including sanding. The purpose of the division is for everyone to use the same specs and to “tune” the car to the best of their ability. It should provide for some really close racing! 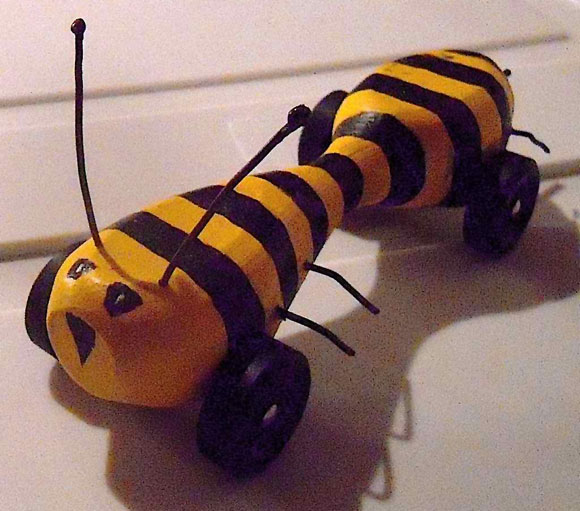 This car is owned by my grandson Tommy. The car came in first place in his competition.

I bought the Pro Body Tool for Awana so I could precision drill the holes instead of using slots. Using the 3/32 bit (Awana axles) produced holes not snug enough. Using super glue was not productive and for the first time in many years, I had a wheel come off during racing. Any suggestions?

Regarding, the Pro-Body tool, the Awana axles are just slightly less than 3/32 inch. But unfortunately, there is no commercially available drill bit that exactly matches the Awana axles. The next smaller bit makes a hole that is much too tight. But I have had a lot of success using white glue (inserted with a toothpick) to hold in the axles. The glue is water based so it tends to swell the wood fibers, tightening up the hole. You can also tighten the hole by inserting water into the hole with a toothpick.

What is the weight of the “Official BSA Grand Prix Pinewood Derby Car Kit”? I guess my direct question is what is the maximum amount of tungsten that I could possibly need while being at the 5 ounce max total car weight?

That depends on two factors: the density of the block in the kit, and the amount of wood removed when making the car.
The blocks vary in density from 3 to 6 ounces. So if you were to make a car that used 1/3 of the block:

I’m wanting to make a pinewood derby car using 1/2 inch brass tubing. Any added weight will consist of lead BB shot, placed inside the tubing. My thinking is that on the downward part of the track the free rolling shot will propel the car forward, and level out on the flat part of the track, making the weight ratio more even. My concern is that the rolling of the shot backwards on the flat portion will actually work the opposite as a brake effect. What are your thoughts or concerns on this matter?

Generally, you want the weight towards the rear of the car on the slope. Then when the car is on the flat, it would nice if the weight was a little closer to the middle of the car (to balance the load). However, if you load BBs in a tube, the BBs will roll to the front on the slope, the opposite of what you want.

Also, most rule sets state that all added parts must be affixed. Loose parts are not acceptable. So loose BB’s could result in a disqualification.