Two years ago Maximum Velocity introduced a “Propeller Car Kit”, which is a car with propulsion assist from a ducted fan. 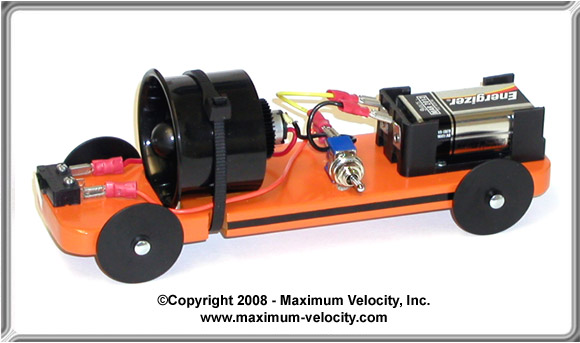 The kit is typically used as a “crowd pleaser”, but there is an occasional race where propulsion (other than gravity) is allowed.

Last year we introduced an upgraded ducted fan, which provided the kit with additional speed. But can the Propeller Car go faster? Certainly! But to understand why, let me share a little technical information.

Technical Background
First, a ducted fan requires a specific voltage and amperage to run at its top RPM (revolutions per minute). The fan is typically used on RC planes, supplied with power by R/C-type, rechargeable batteries, typically lithium polymer (LiPo) batteries. LiPo batteries are very light weight, and readily supply the required voltage and amperage to run the fan at its top RPM.

However, LiPo batteries are somewhat expensive, require special charging equipment, and can explode if improperly used. Alternate types of RC batteries have considerable weight, which doesn’t work well with a propulsion-assisted car.

So, to stay on the safe (and less expensive) side, we use a standard, 9 Volt alkaline battery with the Propeller Car. This battery will supply the required voltage, but will not supply enough amperage to run the fan at top RPM.1

A Novel Solution
So, how can we get more amperage without resorting to LiPo batteries? That question was answered by Rod Shampine. He came up with a novel way to get more amperage to the fan while still using an alkaline battery. His solution was to use a pair of capacitors with a high amperage rating.2 The capacitors store up power from the battery, and then at the flip of a switch, release the stored power quickly to the fan. So the fan has ample voltage and amperage to run at top RPM for a brief period of time (until the capacitors are discharged). 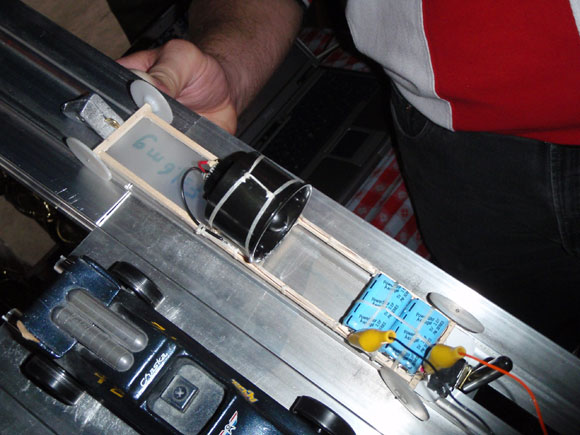 Rod left the battery off the car, made it very light weight, extended the length, and used needle axles. His car was very fast, but he found out quickly that propulsion-assisted cars need some structure and solid axles, as his car took a beating (note the bent front axles). As you can see in the photo, to charge the capacitors between runs, Rod applied a battery using wire clips.

My Implementation
To simplify matters, I decided to keep the battery on the car and modify the Propeller Car Kit to accept a pair of 5 volt capacitors. The capacitors were acquired from Mouser Electronics (part #504- PM-5R0V305-R) for just over $14 each.

By removing the toggle switch, room was made to recess the capacitors into the body of the car. I milled a pocket completely through the car, and then glued a 1/16 inch thick piece of basswood to the bottom of the car to support the capacitors. 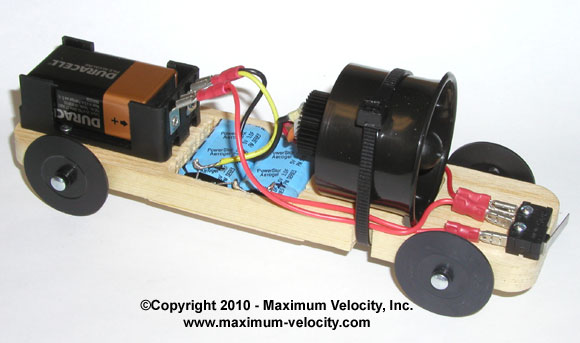 The wiring of the Capacitor Propeller Car is a bit more complicated than on the standard version. Note in the wiring diagram that the capacitors are connected in series. This doubles the voltage capacity to 10 Volts, so that the 9 Volt battery will work.

Speed Results
On our 32 foot aluminum track, a standard Propeller Car with a new battery crosses the finish line in 1.89 seconds. The Capacitor Propeller Car crosses the line in 1.73 seconds. Not only is the capacitor version faster, but an added benefit is that it turns itself off, since the fan quits turning after the capacitors fully discharge (in about ten seconds).

Just for fun, I removed the battery and battery holder, and taped down the connecting wires. This considerably reduced the weight of the car. At the starting gate I charged the capacitors with the battery, and then let her rip. The car was much faster at 1.52 seconds.

However, there was a disadvantage. The car was so light that the spring on the switch wanted to push the car up the hill and start the fan. By being very careful, I could make it work, but if the car was any lighter, it would not have staged properly. Rod ran into the same problem on his car. He had to set a lead weight against the back of the car for proper staging (can be seen in the photo). When the car took off, the lead weight was left behind.

A Little Caution
Using capacitors with a 9 volt battery is generally less risky than using LiPo batteries. However, there is some risk, so if you are not comfortable with basic electronic wiring, then this project is probably not for you.

1One way to picture voltage and amperage is by thinking of voltage as water pressure and amperage as the water flow. Even with a lot of pressure (Voltage), if the pipe is small, the flow of water (amperage) is restricted. Alkaline batteries essentially limit the flow of electricity (amperage).

2To continue the analogy, think of a capacitor like a water tank with a large release valve. Even with a small flow of water into the tank (amperage), as long as the pressure is high enough (voltage), the tank (capacitor) will fill up and build up pressure. When the release valve is opened, most of the water inside will quickly rush out. 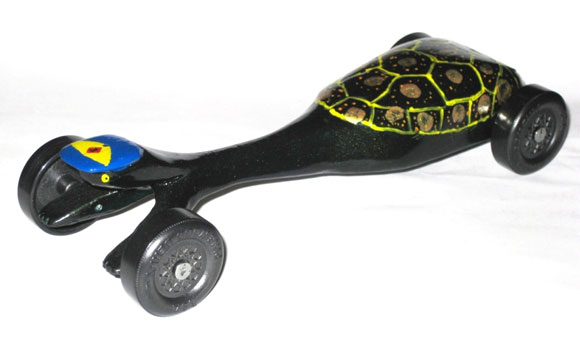 This is my son, Derek’s, first Pinewood Derby car. It is named “Speedy the Turtle” (his idea for the name — it would be “sneaky” and no one would suspect his car was fast, because “turtles are slow, Dad”).

To prepare for the race, we read Pinewood Derby Speed Secrets together and shared many discussions about basic physics (his Pinewood Mantra became, “Friction: The Enemy of Speed,” was echoed for weeks around the house) as well as numerous tips about how to gain the precious time down the track. Tips we learned, including weight placement for ideal center of gravity, three wheels on the track, block treatment to further reduce weight (like baking for almost 2 hours in the oven), and the addition of weight with Tungsten Putty to idealize the final weight at weigh-in, were all incorporated into the final design concept for his sneaky turtle. The turtle’s head was his idea for an adaptation of the “fast start” secret — including the Wolf scout cap!

Our agreement was simple: you design it and I will carve it — and design it he did! I did not allow him to use any power tool with a blade, nor any chisels or knives. I taught him to use my pen lathe to polish axles with sandpaper all the way up to 2000 grit — a mirror shine. He spent 4 1/2 hours sanding the carved block from 60 to 220 grit, learned how to spray paint, and then hand painted the final touches with a Q-tip and toothpick.

In the first heat, Speedy the Turtle generated a track record, and he ended up taking 1st Place. But the best part was watching Derek at the finish line cheering on his den-mates–totally oblivious to the fact that “track record” means “1st Place.” Despite winning every heat holding the track record for the entire event, he was blown away that he had won the race. 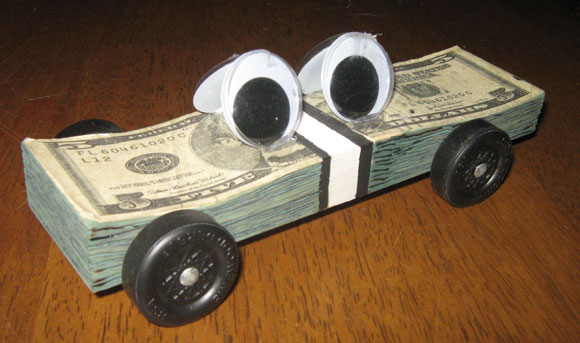 My son, a Webelos II, decided that since we had been pretty inconsistent over his first four years of racing with trying to win the speed category, he wanted to try for best design in his final year. He came up with the idea of the Geico stack of money that you see on the commercials. He built it and painted it entirely on his own. It came out looking great, and he ended up winning for best design in his Pack. He then went onto the District race and took first place for design there as well. The car wasn’t very fast, but he certainly accomplished his goal in his final year of Cub Scouts, and couldn’t have been happier with the two large trophies he walked away with.

This year my older son wants to build an “Ice Road Trucker” derby car. Any ideas?

Does your son want the car to look like a semi-truck? I have seen people make the car look like a truck, but they are mostly for design – they don’t perform well due to the blocky shape. If you type “pinewood derby semi truck” into Google images you will see a few examples.

We used the tungsten plates we purchased from you to weight our car. Would mounting them on top of the car as opposed to the bottom make any difference?

You do get a slight advantage from mounting the weight low (under the car). But it is a subtle difference, so if you need to mount them on top, you can do so with just a negligible performance penalty.