In the first pinewood derby back in 1953, it was written, “The car shall not ride on any type of spring.” No one remembers who formulated Rule 8 or why. Perhaps it was spawned in soapbox derbies, the race pinewood brought in miniature to boys too young to enter. With access to tools, knowledgeable adults and some money, soapbox competitors might build a workable suspension tough enough to survive at speed on a rough road with small wheels.

Fifty years later, Chuck Borough raced a winning pinewood car suspended on wooden springs, cut as one-piece with the body. Had Chuck not called attention to this feat on his “Go Ask Grandpa” website:
(www.goaskgrandpa.com/sample01.htm)
had he not been a physicist for 30 years, or had its construction not been so simple, his clever creation might have gone unnoticed. 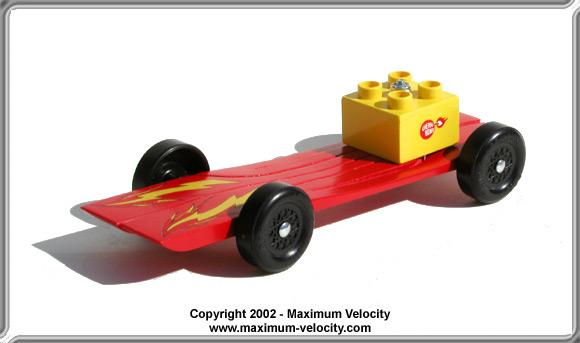 But are the thin, slightly flexible bars of pine able to speed up a jostling pinewood car? Are those who build them willing to risk the “breaks”? With help from her dad, Erica Lastufka (grade 9) pursued the first question. In running about half a dozen tests on her car, she also managed to shed some light on the second question – it broke twice!

Did it work? At first, Erica didn’t know how thick to make the “cantilevers”, the “techy” name for bars that support weight horizontally on one end. She made five front and five bent rear ones with different thicknesses to see how much they would bend. But she didn’t know how much force a wheel feels running over a bump. Her dad helped her build a “bump-o-meter” to measure it. A three-foot rail guides a zooming bump under the wheel of a stationary car. To make sure the bump traveled at race speed, they employed their track’s timer. Keeping the car still and measuring its vertical motion was the key to determining the effects of the shocking encounter.

A few graphs later, she picked five millimeters as the thickness for the suspension. Though the longer rear wheel cantilevers could have been a bit thicker, keeping them all the same made building easier. She was ready to roll! It did – perfectly straight. They were amazed.

Did the suspension work? Yes and No. Back at the bump-o-meter, Erica checked to see if the suspension would let each wheel roll over a bump without lifting other wheels or the tungsten weight supported by it. At slow speeds, it worked as designed. However, at anything near race speeds, it acted just like a rigid car! Hopes were fading.

Another innovation sidelined? Well, Erica, being clever, made locks for the car so it could behave like a rigid car too. She ran time trials with the car locked and unlocked and taped wires to the track for bumps on half of the runs. Yes, the bumps slowed the car down locked or not, but had no effect on the race time difference between the locked and unlocked configurations. In other words, individual bumps – even up to one millimeter in height – were not smoothed out by the suspension.

So it didn’t work? It did. The unlocked configuration beat its locked rival consistently by a whopping two inches, bumps or no bumps. So, it wasn’t because of bumps in the road! Confused? So was Erica. She and her dad really had to think now that there was a real mystery to solve.

The solution has to do with the fact that the wooden cantilevers can not bend quick enough when running over a bump at race speeds. It is easier for the bar to lift the rest of the chassis, wheels and weight attached to it. The quickest a bar can respond to a force on one end is called its “natural frequency”. When a plucked tuning fork sounds out middle “A”, it bends 440 times a second, first one way then back. Erica found that her car’s cantilevers bend less than 170 times a second. They would have to be much thinner to bend over a bump, especially small ones.

So, why does the suspension work? Erica figured out how many times a wheel spins going down her track. In one second, it spins at most 42 times. If there is an imperfection in a wheel bore or if a wheel is not round, its cantilever would need to bend up and down 42 times a second to smooth it out. That’s much less than 170! There could also be patches of uneven varnish and wavy wood grain on the track that would necessitate lower response times too.

Which is it, bad wheels or wavy tracks? Erica found out by using professionally prepared lathed wheels. The results? She had to run the trial twice to make sure. The lathed wheels lost lubricant much faster than the normal ones, so the time difference between locked and free suspension runs were obscured. But in the final analysis, the lathed wheels sped to the finish line significantly faster with the suspension. Waves in the varnish or maybe even wood grain on the track slow a rigid car, allowing one with a simple suspension to win. So, judges will need to dust off old rule number 8 and decide if these simple suspensions are springs or not!

Dad’s Addendum
Erica found a two inch advantage at the finish line for the suspension. Simulations of her locked car show the same advantage for lifting a wheel. If you need to keep four on the floor, use Grandpa’s suspension. If not, lifting a front wheel is still a great way to go.